A photo has been shared repeatedly in blog posts and in Facebook posts in September 2021 alongside a claim that it shows a deadly mosque explosion in Bangladesh. The claim is false: the image has circulated in news reports since December 2019 about a fire at a mosque in Indonesia's Sulawesi island. No deaths were recorded following the fire.

It shows thick smoke billowing from a mosque. 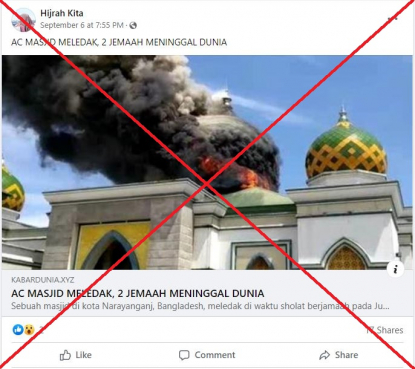 The post's Indonesian-language caption translates to English as: "AC IN THE MOSQUE EXPLODES, 2 MOSQUE ATTENDANTS DIE."

The blog's headline is identical to the post's caption.

The blog post's first paragraph reads: "A mosque in the city of Narayanganj, Bangladesh, exploded during congregational prayers on Friday night, September 4. The incident is believed to have occurred as a result of an AC explosion at the mosque."

The photo, alongside a similar claim, also appeared in August and September 2021 elsewhere, for example in another blog post here, and in other Facebook posts here and here.

A reverse image search on Google found the photo was published in this report by Indonesian news outlet Kompas on January 29, 2019.

The report's first paragraph reads: "Luwu's Belopa Grand Mosque, which is located in Senga sub-district, Belopa district, Luwu regency, South Sulawesi, was burned to the ground after the dome of the mosque caught on fire on Tuesday, January 29, 2019."

Tribun Timur — a subsidiary of the Indonesian-language news outlet Tribunnews — published a video of the incident on January 29, 2019.

It directly corresponds with the photo shared in the misleading posts.

Below is a screenshot comparison of the photo in the misleading post (L) and Tribun Timur's video (R):

No fatalities were recorded after the fire, as reported by Indonesian media here and here.

AFP found that the text in the misleading blog post actually relates to an incident in Bangladesh on September 4, 2020.

An air conditioning unit exploded at a mosque in the Bangladeshi city of Narayanganj,  according to this report published on the same day by the Dhaka Tribune.

The blast — triggered by a suspected gas leak — killed at least 34 people, the newspaper reported here.

AFP previously debunked posts using images from a fire at a mosque in Indonesia's Aceh province that also claimed to show a mosque explosion in Bangladesh.