Two photos have been shared on Facebook and Twitter, as well as in blog posts, alongside a claim that they show a deadly mosque explosion in Bangladesh. However, the claim is false. The photos have circulated since at least December 2019 in news reports about a fire that engulfed a mosque in Indonesia's Aceh province. There were no fatalities in the blaze, according to Indonesian media reports.

One of the photos appeared on Facebook here on September 3, 2021.

It shows the dome of a mosque on fire. 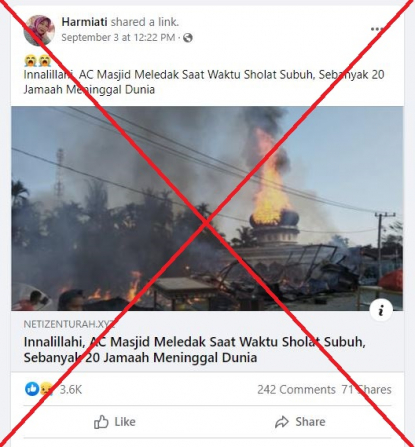 "Innalillahi" is an Arabic expression that is uttered by Muslims when they hear of someone's death.

The first paragraph of the blog post reads: "A mosque in the city of Narayanganj, Bangladesh, exploded during congregational prayers on Friday night, September 4."

A total of 34 people died and 37 others were injured after an air conditioner exploded during prayers at a mosque in the Bangladeshi city of Narayanganj on September 4, 2020, as reported by the Dhaka Tribune, a Bangladeshi English-language daily, here and here.

The photo was also published in other blog posts alongside a similar claim, for example, here, here and here; as well as on Twitter here.

Another photo was shared with a similar claim that it shows the mosque explosion in Bangladesh in this blog post, dated August 25, 2021. 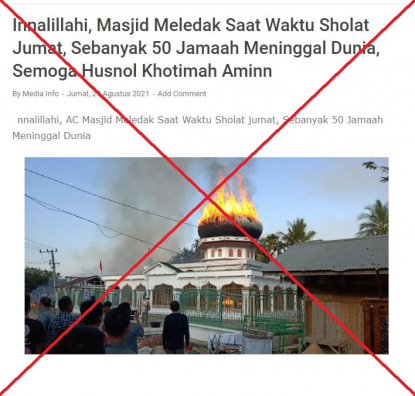 Screenshot of another misleading blog post, taken on September 8, 2021

The photo and a similar claim were also shared in other blog posts here and here, and on Facebook here.

The claims, however, are false. The photos have previously circulated in media reports about a mosque fire in Indonesia in December 2019.

A reverse image search on Google found that the first photo was published in this Indonesian-language report by local news site The Aceh Trend on December 28, 2019.

The headline of the report reads: "Pirak Timu Mosque Engulfed by Blaze".

The first paragraph of the report reads: "A number of kiosks and one mosque building were burned down in Gampong Alue Bungkoh, Pirak Timu district, North Aceh, on Saturday, December 28, 2019."

Below is a screenshot comparison of the photo in the misleading post (L) and the genuine photo in The Aceh Trend's report (R).

Indonesian news outlet Kumparan published a report about the mosque fire from its media partner, AcehKini, on December 29, 2019.

According to AcehKini's report, the fire was caused by a short circuit and there were no fatalities.

The report included AcehKini's video of the incident, which corresponds with the photo shared in the misleading post.

Below is a screenshot comparison of the photo in the misleading post (L) and AcehKini's video (R), with matching features circled in red by AFP.

The second image of the mosque previously appeared in news reports from December 29, 2019, about the Pirak Timu mosque fire, such as Media Aceh and ASPost.id.

The first paragraph of the report reads: "As many as 19 units of shophouses in Keude Alue Bungkoh, North Aceh, were burned down on Saturday morning, December 28, 2019. Apart from that, the main dome of Taqarrub Mosque, located near the array of the shophouses, was also burned down."

Below is a screenshot comparison of the picture in another misleading post (L) and the genuine photo in Media Aceh's report (R).