An image of missiles fired into the air is circulating on social media alongside claims that it shows the ongoing military operation against criminal kidnapping gangs in Nigeria’s troubled Zamfara state. The claim is false: the photo was released last year by North Korea’s state-owned news agency during a missile launch.

“In Moriki LGA Many Bandits Who Managed To Escape The Military Onslaughts Were Sighted By Residents Begging For Refuge But Were Unfortunate, As The Troops On Ground Made Sure That They Neutralized (sic),” the Facebook post reads. 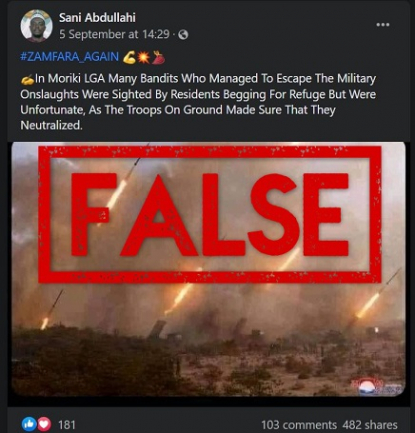 It has been shared almost 500 times since it was published on September 5, 2021.

The image has also been shared alongside the same claim in other social media posts, including this one on Facebook.

Moriki is located in Nigeria’s northwestern Zamfara state where nearly 125,000 people have fled their homes because of worsening violence, according to the United Nations.

Heavily armed criminal gangs known locally as bandits have terrorised communities in northwest and central Nigeria for years, but the groups have recently stepped up attacks on schools, kidnapping hundreds of students for ransom and prompting a military response

Government forces signed a peace deal with the bandits in 2019 but attacks on communities have continued, causing Nigeria’s telecoms regulator to shut down mobile phone lines in the state.

While recent military operations including airstrikes in Zamfara state have left 78 gunmen dead, the photo in question is unrelated to these events.

AFP Fact Check conducted a reverse image search on Google and traced the photo to a tweet from 2020 by Reuters news agency. 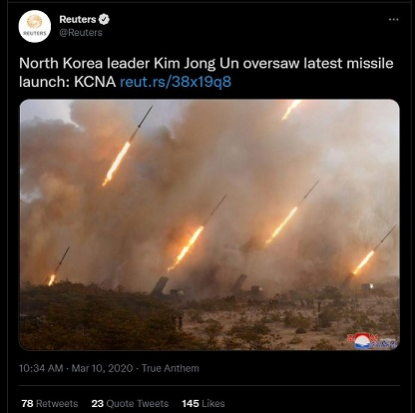 The photo was also used in a Reuters article.

“Missiles are seen in this undated picture released by Korean Central News Agency (KCNA) on March 9, 2020,” reads the caption.

In addition, the logo of the Korean Central News Agency can be seen in the bottom right-hand corner of the photo.