Social media posts claiming that the Dallas Cowboys unveiled new uniforms for its cheerleaders feature a photo of women wearing outfits similar to those in the television show "The Handmaid's Tale." But the National Football League team in Texas says the claim is false, and the image was edited as an apparent satirical comment on a law that effectively bans most abortions in the state.

"Dallas Cowboys unveil new cheerleader uniforms," says text presented as the headline of a news article in a September 5, 2021 Instagram post. A photo below the text shows women dressed in bonnets and robes matching the Cowboys team colors. 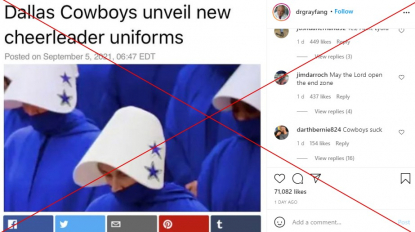 The claim spread online after Texas enacted a law banning abortions after six weeks -- before many women even know they are pregnant. The US Supreme Court refused to block the measure, which has been sharply criticized by US President Joe Biden.

The alleged Cowboys uniforms in the image are similar to those worn by enslaved women forced to reproduce in "The Handmaid's Tale," a television adaptation of Margaret Atwood's 1995 novel about a misogynistic dystopia set in the US northeast in the near-future.

But the Cowboys told AFP that the uniforms of the team's cheerleaders are unchanged.

"The image that you found is something someone photoshopped on the internet and is completely false. We haven't changed our DCC uniforms," said Joe Trahan, director of media relations for the team.

Paul Leigh, a "Meme Maker, Photoshop Expert and Political Satirist," according to his artist donation page, tweeted the image on September 2.

AFP conducted a reverse image search and found that the original picture was taken on February 15, 2019 in Washington, DC by photographer Joe Flood during the filming of the third season of "The Handmaid's Tale." 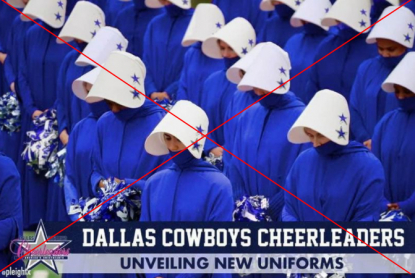 A screenshot taken on September 8, 2021 shows an image used in social media posts 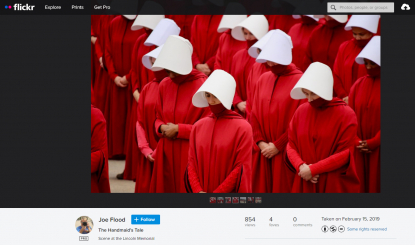 A screenshot taken on September 8, 2021 shows the original photo by Joe Flood published on Flickr

As seen in the side-by-side images above, the original photo was edited to make it look like the women are cheerleaders.