Image shows car with futuristic design produced in Libya in 2009, not in Nigeria

An image of a white car with sharp angles has been shared thousands of times on Facebook in Nigeria, alongside claims that it was made in Biafra – a collection of states seeking independence in southern Nigeria. This is false: the photo was taken at a launch attended by AFP in Libya in 2009 and shows a car presented to the press as the brainchild of former leader Moamer Kadhafi.

The image, posted here and here on Facebook in Nigeria, has been shared more than 1,600 times.

“Innoson Laraki... made in Biafra!” reads one post, referring to local car maker Innoson Vehicle Manufacturing (IVM), a company based in Nnewi, a town in Anambra state. 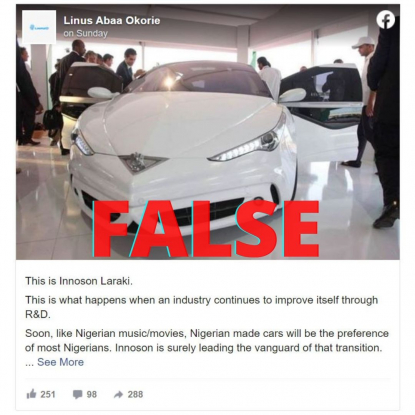 A screenshot taken on September 7, 2021, showing one of the false posts

Innoson is regarded as one of Nigeria’s pioneer vehicle manufacturing companies and produces a selection of model types.

The Facebook posts give credit to the company for the car seen in the image, which shows people inspecting a white passenger vehicle with sharply-pointed front and rear ends.

However, the car was not a product of Nigeria or the separatist region known as Biafra.

A reverse image search shows the picture was taken in Libya in August 2009.

It was captured by photographer Sabri Elmhedwi for the Deutsche Press Agency (DPA), as seen here. AFP was also at the unveiling ceremony and filmed a video of the event.

The footage shows a Libyan-designed car named  “The Rocket”. It was presented to the media in Tripoli during a summit meeting of African Union (AU) member states, and on the eve of former leader Moamer Kadhafi’s 40th anniversary after coming to power.

Two prototype cars, said to be designed by Kadhafi himself, were shown to journalists and described by the promoters of the project as examples of “the future of the automobile industry”.