Skip to main content
A health worker shows a bottle of ivermectin in Cali, Colombia, on July 21, 2020 ( AFP / Luis Robayo)

Oklahoma hospitals are not overwhelmed by ivermectin overdoses

Online articles and social media posts claim that overdose cases from people using anti-parasitic drug ivermectin against Covid-19 are overwhelming hospitals in Oklahoma, citing remarks by a doctor in the US state. But hospitals at which the doctor has worked rejected the claim, and the Oklahoma Center for Poison and Drug Information said it has received limited calls about problems related to the drug. 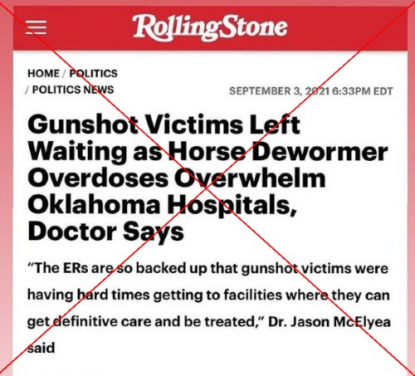 The article has since been updated, but its original headline has spread as a screenshot on Instagram and Facebook.

Rolling Stone was not the only outlet to run a story based on remarks made by an Oklahoma family doctor, Jason McElyea, to local television station KFOR.

"The ERs are so backed up that gunshot victims were having hard times getting to facilities where they can get definitive care and be treated," McElyea -- who could not be reached for comment by AFP -- told the channel.

However, Oklahoma hospitals at which McElyea has worked are pushing back against the claim that they are overwhelmed, which spread online during a spike in health problems caused by people ingesting veterinary ivermectin in the mistaken belief that it will protect them against Covid-19 or treat the deadly disease.

Northeastern Health System Sequoyah wrote in a September 4 Facebook post that McElyea has not worked at its Sallisaw, Oklahoma location in two months.

"NHS Sequoyah has not treated any patients due to complications related to taking ivermectin. This includes not treating any patients for ivermectin overdose," the post said, adding that "all patients who have visited our emergency room have received medical attention as appropriate. Our hospital has not had to turn away any patients seeking emergency care."

Integris Grove Hospital said in a statement that it had seen some patients affected by ivermectin complications and that McElyea's comments to the press were misrepresented to present those few cases as the sole cause for hospital congestion.

"There is a lot of media attention surrounding remarks reportedly made by Dr McElyea. While we do not speak on his behalf, he has publicly said his comments were misconstrued and taken out of context," the statement said.

"What we can confirm is that we have seen a handful of ivermectin patients in our emergency rooms, to include INTEGRIS Grove Hospital. And while our hospitals are not filled with people who have taken ivermectin, such patients are adding to the congestion already cause by Covid-19 and other emergencies," it added.

Scott Schaffer, director of the Oklahoma Center for Poison and Drug Information, told AFP that calls related to ivermectin remain relatively low. "It's nowhere near the number of patients that were reported," he said.

"In August, we had reports of 12 people calling about ivermectin with minor symptoms, like nausea, vomiting, diarrhea and one with dizziness," he said, adding that while forms of ivermectin for humans exist, "there are some people who are dosing themselves with agricultural products."

Schaeffer, whose agency provides poison management advice to Oklahoma residents, added that while there is a lot of interest in ivermectin stories, there are also false reports in terms of scale, and not just in the Sooner State. "In Mississippi it was reported that 70 percent of their calls were ivermectin related, but that was misinterpretation," he said.