Image of man in coffin is from a comedy sketch, not real-life 'crate challenge'

A photo of a man in a coffin has been shared on Facebook in Zambia alongside a claim that it shows a Ghanaian who died while attempting the social media-inspired “crate challenge”. But the claim is false: the image was taken from a comedy sketch by comedian Desi Banks warning the public about the dangers of attempting the online craze that has reportedly injured people. 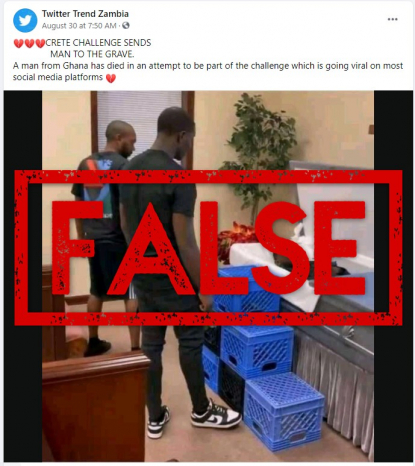 “CRETE CHALLENGE SENDS MAN TO THE GRAVE (sic),” the post claims. “A man from Ghana has died in an attempt to be part of the challenge which is going viral on most social media platforms (sic).”

In the accompanying image, two men are seen looking at a third person in a coffin, which has blue and black plastic crates stacked next to it.

The “crate challenge” is a viral online craze that involves people sharing videos of themselves walking over stacked milk crates.

The unsteady nature of the structures means people often fall and hurt themselves, as these videos sampled by AFP Fact Check show (here, here and here).

But the picture circulating on Facebook does not show a man who died in Ghana while attempting to do this.

By conducting a reverse image search, AFP Fact Check found that the image is a screenshot from a video comedy sketch produced by US-based comedian Desi Banks highlighting the dangers of the social media phenomenon.

Articles in US media (here and here) and this AFP story report how paramedics and healthcare providers have cautioned people against partaking in the challenge, saying injuries are putting an additional strain on the health system already impacted by Covid-19.

A keyword search on Google found no evidence of a Ghanaian man dying while attempting the challenge.