An image of a newspaper front page has been shared thousands of times on social media in Nigeria alongside a claim that THISDAY newspaper, an influential media outlet in Nigeria, reported that the governor of Imo state in the country's southeast had ordered state-sponsored marriages between people of Igbo and Fulani heritage. This is false: the newspaper did not run such a story. The image was digitally altered from the August 27, 2021 edition of THISDAY newspaper.

Bullet points below the headline claim the governor would pay dowries for Fulani herdsmen willing to marry women from within his state and that a fine of N1 million (about $2,400) would be imposed on parents who refuse to grant consent to Fulani men seeking their daughters’ hands in marriage.

The same image has also been shared here, here, and here.

Imo state has been facing ethnic and political unrest for several months. The state, which is home to the Igbo ethnic group, has been a battleground for the Eastern Security Network, the armed wing of the Indigenous Peoples of Biafra (IPOB) separatist group. IPOB has been designated a terrorist organisation by the government of Nigeria.

This year alone, at least 127 police officers and members of security services have been killed, and 20 police stations and election commission offices have been attacked in the region, as AFP reported here

Historically, the Igbo have felt marginalised in Nigeria, notably because their home region, the southeast, is the only one in Nigeria with fewer than six states.Moreover, no Igbo has served as the country's president since 1966.

There have been reports of herdsmen from northern Nigeria attacking farmlands in Imo and other parts of the southeast. AFP ran special coverage of the herder-farmer crisis in Nigeria. Fulani herders have been killed in reprisal attacks, according to local media.

However, the image of the newspaper front page has been digitally altered, and the Imo state government denied that it is sponsoring weddings between Fulani settlers and Imo women. Oguwike Nwachuku, the governor’s spokesman, said the “clowned newspaper” was “ill conceived”.

By conducting a reverse image search of the image, AFP Fact Check found the original newspaper front page, which does not mention marriages.

A careful look shows they are from two different sources. THISDAY news headlines are always in bold fonts, unlike the text in the viral image. Examples of the formatting of daily editions of the newspaper can be found here.

Furthermore, THISDAY newspaper capitalises all words in the headline. In the viral image, half of the headline is in lowercase. THISDAY released a statement explaining that the purported front page shared online did not come from the Nigerian media outlet.

“The management of THISDAY yesterday disowned a digitally manipulated electronic version of the Friday, 27 August 2021 edition of the newspaper, which replaced the original front-page story with a fake one,” said Eniola Bello, the newspaper's managing editor. A screenshot taken on August 31, 2021, showing THISDAY's disclaimer comparing the fabricated front page to the original one

“We wish to state that THISDAY at no time published the said story. Our lead story on Friday, August 27 was ‘Buhari Elated as NNPC Breaks Jinx, Declares N287bn Profit, First in 44 Years’”.

The first, captioned with laughter emojis, was posted by "Mazi ikenga igbotv" on Saturday August 28, 2021. The same image was posted by a second page called “Prince Okey Emezu” on the same day.

Facebook transparency information shows that the first page is run from India and Nigeria. The history of the second page shows that it was created on January 15, 2020, as an imitation of the Imo governor’s official Facebook page. On June 17, 2020, the page's name was changed to “Senator”, before it was further adjusted on June 22, 2020 to "Prince Okey Emezu". According to Facebook, the page is run from the UK and the US. 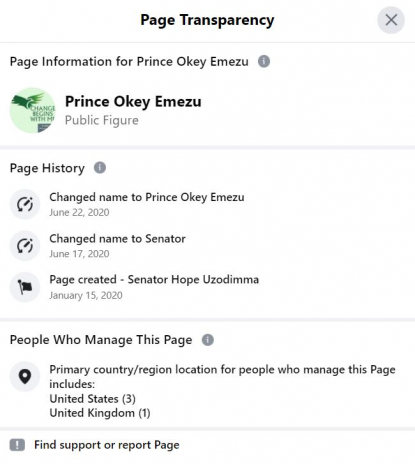 A screenshot taken on August 31, 2021, showing the page's transparency information