Skip to main content
A helicopter displaying a Taliban flag flies on September 1, 2021 above the group's supporters gathered in Kandahar to celebrate the withdrawal of all US troops from Afghanistan ( AFP / Javed Tanveer)

Video does not show Taliban using helicopter to execute man

US Republican politicians shared a video of a man hanging from a fixed line below a helicopter in Afghanistan, claiming it shows the Taliban executing him. This is false; footage shows he was affixed by a body harness, not a ligature around his neck, and journalists say he is a Taliban member who was attempting to attach the group's flag to a pole.

"This horrifying image encapsulates Joe Biden's Afghanistan catastrophe: The Taliban hanging a man from an American Blackhawk helicopter," Senator Ted Cruz wrote on Twitter on August 30, 2021 above a tweet featuring a 12-second video of the scene. 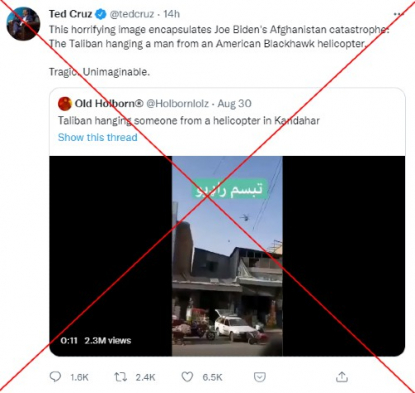 Representative Dan Crenshaw also spread the video on Twitter, while conservative pastor Greg Locke made the claim without including the footage. Many Facebook and Instagram users also posted stills from the clip.

While the video is authentic, it is being misrepresented. Despite the low quality of the clip that is circulating online, it is possible to see that the man is hanging from a harness, not by the neck, and moves as if he is alive.

The video was apparently first published on Twitter on August 30 by Afghan journalist Sadiqullah Afghan, not by the account Talib Times, as other media reported. Afghan told AFP he took the video.

He is based in the southern Afghan city of Kandahar, where he runs Tabasum Radio. The writing visible on the video spread by Cruz and others includes the name of that outlet, which suggests Afghan's video was the one that has spread on the internet.

Afghan told AFP via WhatsApp that the man hanging from the line was not being hanged and in fact belonged to the Taliban. "One of the governor's bodyguards tried to fly the flag to the 100-meter-high antenna by helicopter, but was unable to do so," he said.

Afghan shared two higher-quality versions of the video with AFP showing the same scene, in which the harness securing the man is more noticeable. 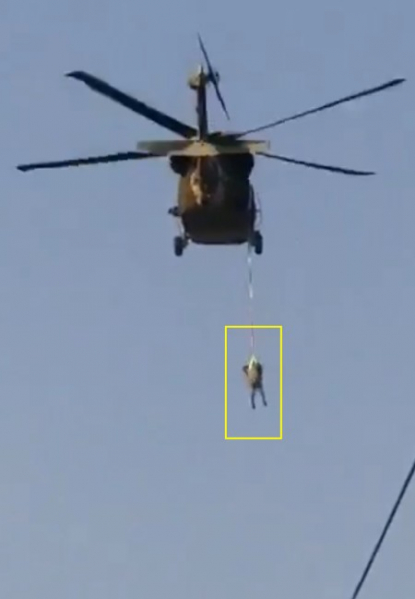 Screenshot taken on September 1, 2021 of a video showing a man in a harness below a helicopter in Afghanistan 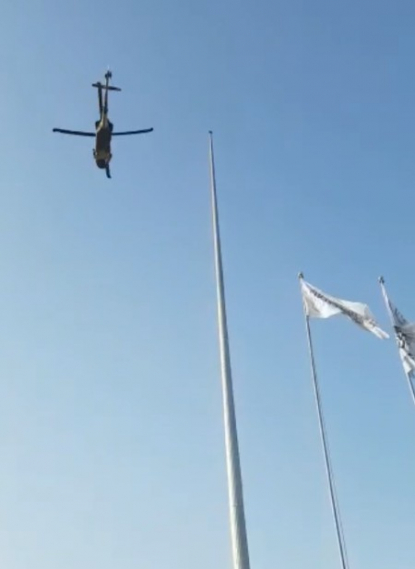 Screenshot taken on September 1, 2021 of a video showing a helicopter and a flagpole in Afghanistan

On September 1, Afghan sent a photo of the pole in question, in which the Taliban appear to be constructing scaffolding in order to reach the top. 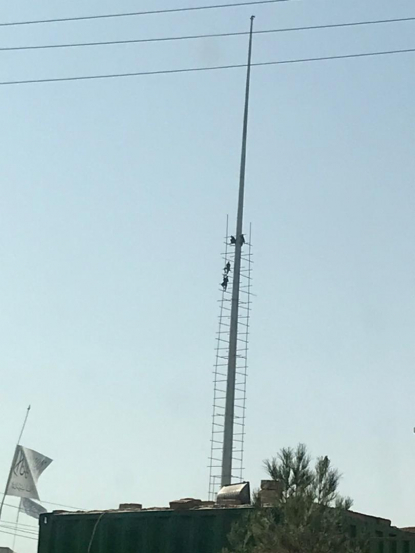 Taliban members work to reach the top of a pole in order to hang the group's flag in Kandahar, Afghanistan on September 1, 2021 ( Handout / Sadiqullah Afghan)

An AFP stringer journalist in Kandahar also spoke to witnesses who said the video did not show a hanging.

Afghan journalist Bilal Sarwary wrote on Twitter on August 31 that the helicopter's pilot was trained in the United States and the United Arab Emirates. "Taliban fighter seen here was trying to install Taliban flag from air but it didn't work in the end."

Afghan pilot flying this is someone I have known over the years. He was trained in the US and UAE, he confirmed to me that he flew the Blackhawk helicopter. Taliban fighter seen here was trying to install Taliban flag from air but it didn’t work in the end. https://t.co/wnF8ep1zEl

"This was the mujahid that the helicopter airlifted today to fix the flag. He wanted to fix the rope on the pole at the governor's office" in order to raise the Taliban flag, he wrote.

As the Taliban advanced through Afghanistan and government forces crumbled, the insurgents seized a slew of weapons provided by the United States, including helicopters.

"We don't have a complete picture, obviously, of where every article of defense materials has gone. But certainly, a fair amount of it has fallen into the hands of the Taliban," White House National Security Advisor Jake Sullivan said on August 17.

He noted that the Black Hawk helicopters had been supplied to Afghan government forces to help battle the Taliban.

America's longest military conflict drew to a close on August 30 when the last of its forces departed from Kabul's airport, where they had overseen a frenzied airlift that saw more than 120,000 people flee.

AFP Fact Check has debunked other claims about Afghanistan here.