A video of armed men apparently executing people in the street has been shared in social media posts claiming the footage shows Taliban fighters killing civilians who refused to support them after the group's takeover of Afghanistan in August 2021. The claim is false; the video has circulated since at least 2019 in posts about a street theatre performance in Kabul.

"The civilians who did not support the Taliban were brutally massacred," reads this Indonesian-language post from August 20, 2021.

It purports to show a video of "civilians who wanted to leave Afghanistan" who were "intercepted and executed".

The footage, which lasts more than six minutes, shows a man speaking into a microphone as crowds gather in the street.

Armed men fire their weapons at a passing car before a bloodied man is dragged out of it. Later in the video, a group of men with hands on their heads are forced to kneel to the ground next to several bodies lying in the street. 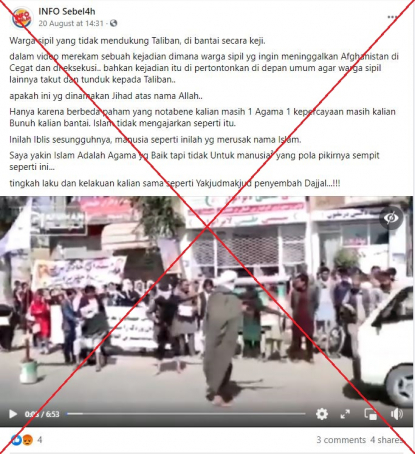 The video has been viewed more than 5,900 times after it was shared alongside a similar claim on Facebook here, here and here; and on Twitter here.

The video circulated after the Taliban seized control of Afghanistan in August 2021, sparking widespread concerns about human rights under the group, which was infamous for its brutal justice system during its previous rule from 1996 to 2001.

A reverse image search, followed by keyword searches on Google, found the same video posted here on September 25, 2019, on the YouTube channel of an account called Afghan International.

The Persian-language title reads: "How the Taliban opens fire on travelers at Jalrez! Afghan International".

The caption reads: "How the Taliban opens fire on travelers at Jalrez! A performance by artists on how the Taliban blocks the road. See more in the video".

Human Rights Watch reported in September 2019 that human rights official Abdul Samad Amiri was abducted and killed while travelling through Jalrez, a district 60 kilometres (35 miles) from the Afghan capital, Kabul.

Local media in Afghanistan has previously reported on Taliban fighters "harassing" locals travelling in the area.

Below are screenshot comparisons between the video in misleading post (L) and Afghan International's video (R): 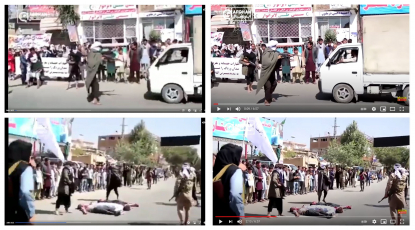 A photo showing a similar scene to the video was published here on the Facebook page of Ghan TV Australia on September 16, 2019.

Translated from Persian to English, the post's caption reads: "Western Kabul citizens presented a performance on the hostage-takings at Jalrez

"The member of the High Council of Peace is involved in the insecurities of Jalrez. Tens of western Kabul citizens called for an end to insecurity and hostage-takings at the Jalrez-Maidan Wardak highway area by performing street theatre."

Another photo showing a similar scene was published in this September 17, 2019, report by Afghan news site Etilaatroz, headlined, "'Death Valley'; Why is Jalrez not made safe?"

The photo's caption reads: "A symbolic movement by a number of Kabul's civil activists in relation to the killings of civilian travelers at Jalrez."