A photo has been shared hundreds of times in Facebook and Twitter posts purporting to show an explosion at a mosque in Pakistan at the hands of the Taliban. The post circulated online after the group seized power of Afghanistan in August. However, the claim is false. The photo has circulated since at least 2014 in news articles about the Islamic State group blowing up a mosque in Mosul, Iraq.

"The first mosque in Pakistan was launched into space with the help of the Taliban, the congratulations shouldn't stop," reads a Hindi-language tweet posted on August 21.

The tweet shows a photo of smoke billowing from a tall building. 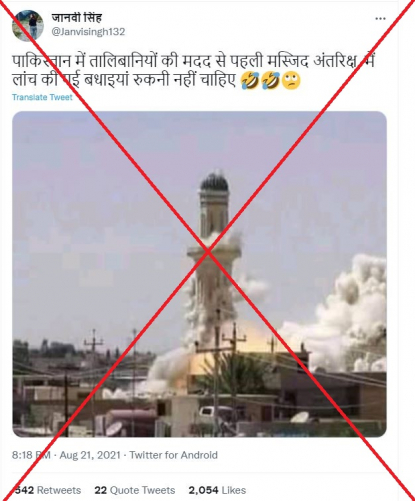 A reverse image search on Google found the same photo in news reports about a mosque explosion in Mosul, northern Iraq in 2014.

IraqiNews featured the photo in a report on July 6, 2014 about militants from the Islamic State group targeting mosques in Mosul.

British newspaper The Independent also published the photo in a report from July 14, 2014, where the image is captioned, "The Shia Al-Qubba Husseiniya mosque in Mosul explodes" and credited to AP news agency. 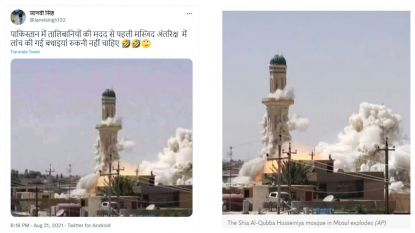 Keyword searches found the photo published in a Huffington Post report from July 7, 2014, alongside a similar photo of the same mosque exploding.

The image caption reads, "In this undated photo posted on a militant website that frequently carries official statements from the Islamic State extremist group, which has been verified and is consistent with other AP reporting, Shiite’s Al-Qubba Husseiniya mosque explodes in Mosul, Iraq".

The photo was not available in AP's archives.

AFP did not find any credible news reports about an explosion at a mosque in Pakistan by the Taliban.