A video viewed tens of thousands of times on social media claims that two children died from a Covid-19 vaccine in Australia's most populous city, Sydney. The claim is false: as of August 31, Australia has not recorded any deaths from the Pfizer-BioNTech jab, the only coronavirus vaccine that has been given to under-18s in the country. 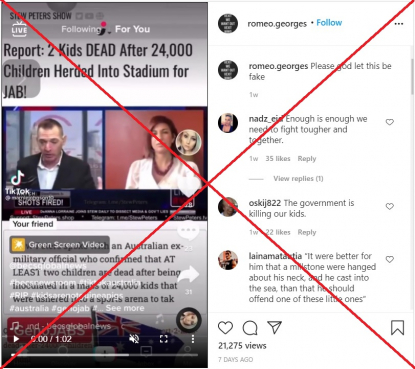 The clip is an extract of this video from August 18, 2021 featuring conservative American broadcaster Stew Peters and US Republican candidate DeAnna Lorraine.

In the video, Peters claims that an ex-member of the Australian military told him two high school students died in a vaccination drive in the Australian state of New South Wales.

"Two kids already dead, subsequent to this injection, in the stadium where they were ushered in and assured everything would be okay," he said.

In mid-August, New South Wales offered the Pfizer-BioNTech jab to high school students from western Sydney at the Qudos Bank arena -- one of the state's mass vaccination hubs -- after a new outbreak of Covid-19.

A similar claim was also shared on Facebook here and here.

The Australian Department of Health said the Therapeutic Goods Administration -- the agency responsible for monitoring vaccine safety -- has not recorded any deaths linked to the Pfizer-BioNTech Covid-19 vaccine.

"To date, no deaths reported to the TGA following vaccination have been confirmed as being caused by Comirnaty (Pfizer)," a spokesperson told AFP on August 24.

The posts also misrepresent the number of high school students who were given the jab at the Qudos bank arena.

However, only 15,390 Pfizer-BioNTech doses were administered to high school students at the arena, according to The Pulse, an official publication of the Western Sydney Local Health District.

Australia has recorded seven vaccine-related deaths from the AstraZeneca vaccine, which has so far only been administered to adults.

As of August 31, the Pfizer-BioNTech jab has been approved for people aged 12 and over in Australia.