US drug regulator did not approve thalidomide in the 1960s

Social media posts claim the US Food and Drug Administration approved the drug thalidomide, which caused serious birth defects in the 1950s and 1960s. But the regulatory agency did not do so at the time, procedures have been tightened in the last 60 years, and a recently approved Covid-19 vaccine was subject to clinical trials and independent review.

"People that never learned history are doomed to repeat it, and unfortunately, schools selectively omit the best history," says an August 24, 2021 Facebook post. It includes an image of children with malformed arms sitting at a pool and the text: "Thalidomide was also FDA approved." 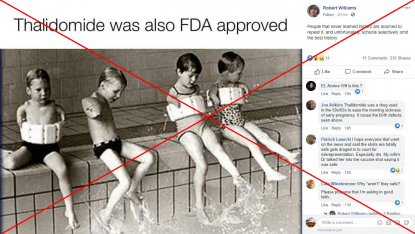 The image was also shared on Twitter by Billy Prempeh, a Republican congressional candidate in the US state of New Jersey. The tweet is no longer available, but screenshots of it have spread on Facebook and Instagram, while similar claims can be found here and here.

The posts spread following the announcement that the Pfizer-BioNTech Covid-19 vaccine had received full FDA approval for people over the age of 16. This followed its distribution under an "emergency use authorization" granted as part of the US response to the pandemic.

The US immunization drive against Covid-19 has administered more than 364 million doses. However, misinformation about vaccines continues to spread, leaving some reluctant to receive the jabs.

It is inaccurate to compare thalidomide -- a sedative that caused a health scandal after scientists found a connection between the drug and severe birth defects -- to Covid-19 vaccines, as AFP examined in a previous fact-check.

The Science Museum of London explains on a webpage dedicated to the history of the drug that "in the 1950s, scientists did not know that the effects of a drug could be passed through the placental barrier and harm a fetus in the womb, so the use of medications during pregnancy was not strictly controlled."

Despite the drug being recommended to pregnant women in many countries, the US did not approve it in its territory at that time.

Dr Frances Kelsey, a medical officer responsible for licenses at the FDA at the time, refused to approve the manufacturer's application for thalidomide because of "its inadequate evidence," and despite "constant pressure" from the pharmaceutical company.

The medical disaster was a milestone in the history of the agency, as it led to increased support for tighter drug regulation and research on side-effects.

In 1962, President John F. Kennedy signed the Kefauver-Harris Drug Amendments to the Federal Food, Drug and Cosmetics (FD&C) Act, which changed drug protocol and oversight in the US, requiring manufacturers to prove the safety and effectiveness of a product before it can be marketed in the states.

Thalidomide was approved by the FDA in 1997, but the drug is under special safety restrictions, and is only used to treat rare conditions such as inflammation in leprosy patients and multiple myeloma. It is not approved for use by pregnant women.

The development of Thalidomide also cannot be compared to the scientific process that has led to the Covid-19 vaccines.

Dr Susan Ellenberg, professor of biostatistics, medical ethics and health policy at the University of Pennsylvania's Perelman School of Medicine, told AFP in December 2020 that the research around Covid-19 vaccines is "worlds different from what was done with thalidomide."

"Thalidomide was studied in an era when there was very little in terms of regulatory requirements for drug approval," she said. "Whatever trials were done, they weren't even required, they were very small."

The Covid-19 shots have undergone clinical trials and real-world testing.

Dr Peter Marks, director of FDA's Center for Biologics Evaluation and Research said in an August 23, 2021 press release that the FDA's "scientific and medical experts conducted an incredibly thorough and thoughtful evaluation of this vaccine."

In approving the Pfizer-BioNTech vaccine -- now known as Comirnaty -- he said the agency "evaluated scientific data and information included in hundreds of thousands of pages, conducted our own analyses of Comirnaty's safety and effectiveness, and performed a detailed assessment of the manufacturing processes, including inspections of the manufacturing facilities."