Photo shows FBI officers near YouTube offices in California, not in Nigeria to arrest Abba Kyari

An image showing four officers of the United States Federal Bureau of Investigation (FBI) has been shared multiple times on Facebook alongside claims that it shows them in Nigeria to arrest the country's now-suspended “supercop”, Abba Kyari. This is false; the image in question was taken in the United States in 2018, while the FBI was carrying out an operation near YouTube's headquarters in California.

The image was shared here on Facebook with the caption: “BREAKING News!!! FBI at Police Headquarters Over Hushpuppi and Abba Kyari’s alleged bribe case.” This suggests that the FBI was at the police headquarters in Abuja, Nigeria on the date the picture was posted -- July 30, 2021. 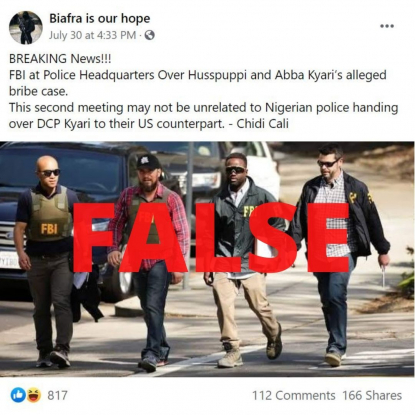 A screenshot taken on August 24, 2021, showing the false post

The same claim was also shared in other Facebook posts here and here.

Abba Kyari is a deputy commissioner of police (DCP) in Nigeria frequently described as a "supercop". Until recently, he was considered a star police officer and even invited to the Nigerian national assembly, where he was recognized for his service to the country.

But in July 2021, the FBI told Nigerian authorities that the police officer had worked with social media influencer Ramon Abbas, known as Hushpuppi, who pleaded guilty to money laundering charges in the US. According to the US justice department, Kyari was allegedly paid by Hushpuppi to arrest another alleged fraudster.

Kyari was suspended by the Nigerian Police Force and is under investigation.

However, the FBI did not come to Nigeria to arrest Kyari, as the posts falsely claimed.

A reverse image search of the picture in question revealed that it has been on the internet since 2018 and does not show recent events. The image was taken by Reuters photographer Elijah Nouvelage in April 2018, as reported here. It shows FBI officers near YouTube headquarters in San Bruno, California following an active-shooter incident. 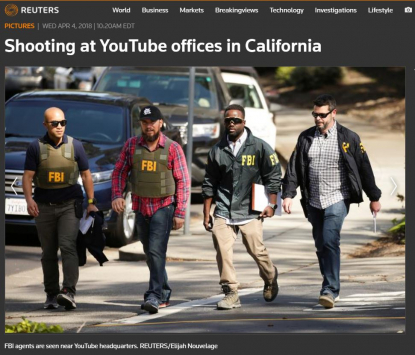 A screenshot taken on August 24, 2021 showing the original Reuters image

Nigerian police spokesman Frank Mba told AFP Fact Check that the police had received “allegations and indictment processes from the Federal Bureau of Investigation (FBI) against DCP Abba Kyari” and said that an internal investigation was ongoing. He did not comment on whether FBI staff had come to Nigeria.