Skip to main content
Afghans gather on a roadside near the military part of the airport in Kabul on August 20, 2021, hoping to flee the country after the Taliban's military takeover ( AFP / Wakil Kohsar)

Photo of man carrying girl is from Iraq, not Afghanistan

Social media posts urging people to pray for Afghanistan feature a photo of a man walking down a rubble-strewn street with a young girl in his arms. But the image was taken in the Iraqi city of Mosul, not Afghanistan.

"A good father will protect his daughter. Pray for Afghanistan," says an August 21, 2021 Facebook post that includes the image. 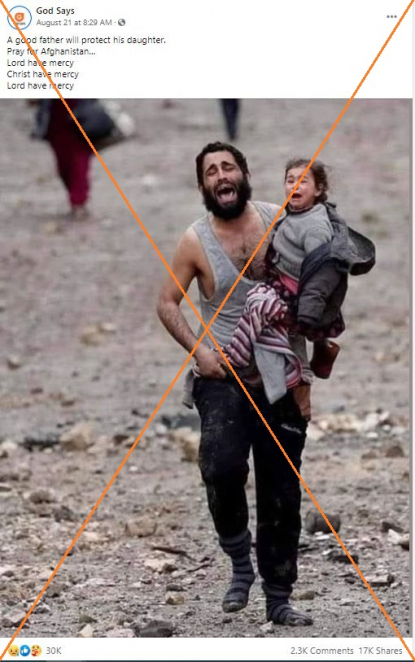 Other examples of the claim -- part of a series of inaccurate assertions circulating online after Taliban insurgents seized control of Afghanistan after 20 years of war -- appeared on Facebook, Twitter and Instagram.

AFP conducted a reverse image search and found that the photo is a cropped version of a Reuters picture from Mosul during the battle to retake the north Iraq city from the Islamic State jihadist group.

"A man cries as he carries his daughter while walking from an Islamic State controlled part of Mosul towards Iraqi special forces soldiers during a battle in Mosul, Iraq, March 4, 2017," the caption of the photo says.

A screenshot taken on August 24, 2021 shows a Reuters photo

AFP Fact Check has debunked other false or misleading claims about Afghanistan here.