Tennessee order does not allow forced relocation to Covid-19 camps

Online articles and social media posts claim an order by the governor of the US state of Tennessee allows National Guard troops to "kidnap" people and take them to Covid-19 "internment camps." This is false; the order allows National Guard members to assist medical workers in a health care system strained by rising case numbers, but makes no mention of abductions, and the governor's office has said the claim is inaccurate.

"Tennessee Has Just LEGALIZED Government COVID Kidnappings!" says the headline of an article published on a website called The Daily Allegiant on August 13, 2021.

It claims Executive Order 83 authorizes troops to "break into peoples' homes, kidnap them at gunpoint, and take them to covid internment camps." 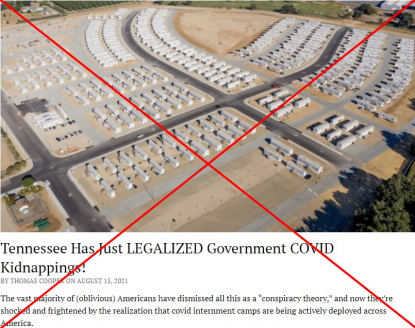 The claim -- part of a pattern of false information presenting Covid-19 as a conspiracy designed to control the population -- also appeared on Facebook here, has been shared on Instagram as well as Twitter, and was spread in this article.

Tennessee's Republican Governor Bill Lee signed Executive Order No. 83 on August 6, as the United States faces a nationwide surge in Covid-19 cases, driven by the highly contagious Delta variant of the coronavirus.

Around 41 percent of Tennessee's population is fully vaccinated, compared with more than 51 percent nationally.

Lee's order says that "hospitalizations are increasing as Covid-19 variants continue to increase positive case rates and burden the health care system." It includes 21 measures to address that strain, such as easing licensing requirements for out-of-state doctors, and making more hospital beds available.

Only one of those measures concerns the National Guard, saying its personnel may perform Covid-19 testing, nursing functions and operate ambulances.

A review of the text of the order shows it makes no mention of allowing National Guard members to "kidnap" people or send them to isolation facilities.

In response to inquiries about the claim from AFP, Lee's office referred to a letter to the state's General Assembly, written by Brent Easley, the governor's legislative director, addressing the misinformation. Easley described the claims as "demonstrably false" and said "these rumors distort Executive Order 83."

Easley outlined five of the conspiracy theories surrounding Executive Order No. 83 and labeled them all as "false," as shown in the below image.

A screenshot taken on August 24, 2021 shows part of a letter from the Tennessee governor's legislative director to the state's General Assembly

Section 18 of the order does allow for the construction of "temporary quarantine and isolation facilities," but this is to provide "flexibility for hospitals to set up alternate care sites on their grounds such as tents in parking lots or use of a conference room to treat patients," Easley wrote.

The National Guard did not comment directly on the social media claims, but has said thousands of its personnel have been working alongside the state's Department of Health, Tennessee Emergency Management Agency and other agencies to fight the spread of Covid-19.

AFP debunked a similar false claim that US President Joe Biden announced Americans not vaccinated before 2022 would be put into camps -- an assertion that originated on a satirical site. Quarantine sites for travelers returning to Canada were also misinterpreted as internment facilities.