Multiple Facebook posts have shared an image purporting to show a video conference between US President Joe Biden and Myanmar military leader Min Aung Hlaing, who became prime minister of the new caretaker government of Myanmar on August 5, 2021. The image, however, has been doctored. The original photo of Biden actually shows him in a video conference with an American journalist in July, 2020. Similar photos of Min Aung Hlaing have circulated in reports about his visit to the Republic of Tatarstan in June 2021. As of August 20, there are no official statements about or credible reports on Biden meeting the Burmese general online.

The image was published on Facebook here on August 5, 2021.

The Burmese-language caption of the post reads in part: "PM U Min Aung Hlaing of Myanmar’s caretaker government and US President Joe Biden met via video conference".

"At the invitation of the White House, the Prime Minister of the Republic of the Union of Myanmar U Min Aung Hlaing and US President Joe Biden held a video conference for more than an hour today at 10:00 am Myanmar time (11:30 pm US time). The meeting focused on the current political situation in Myanmar. Prime Minister Min Aung Hlaing said the military inevitably had to take control of power because of the election frauds in the 2020 election and [his government] will hold a free, fair and inclusive election in August 2023 to revive democracy. US President Joe Biden has responded by saying that he understands the details of the 2020 election fraud that the military has uncovered."

The misleading post also claims that the US President told Min Aung Hlaing that he will discuss with top leaders at the White House the possibility of classifying the shadow National Unity Government (NUG) and the People Defense Forces (PDF) as terrorist organizations.

However, the photo has been doctored. Keyword searches found no credible reports or official statements that Biden met Min Aung Hlaing in August 2021.

Reverse image searches on Google found the original picture of Biden was taken during this interview with Jeff Gillan, an American journalist working for News3LV on July 28, 2020.

The title of the report reads: "Biden to News 3: Trump 'behind the curve' on pandemic; calls for national mask mandate".

The article reads in part: "I got an exclusive few minutes with the presumptive Democratic nominee on Tuesday, the day our economy took a big COVID-19 induced punch to the gut. The Consumer Electronics Show bailed on Las Vegas thanks to unsafe conditions caused by the virus. CES says it will be back in 2022. That's 171,000 people not coming next January and not spending millions of dollars to be here. So I asked Joe Biden, over Zoom, about the pandemic. Do we need a national mask mandate, I asked him?"

Below is a screenshot comparison between the Biden's photo in the misleading post (L) and News3LV's video (R):

Another Google reverse image search of Min Aung Hlaing's picture in the misleading post shows similar photos have circulated in reports about his visit to the Republic of Tatarstan. The pictures were published here on Tatarstan government's official website on June 25, 2021. 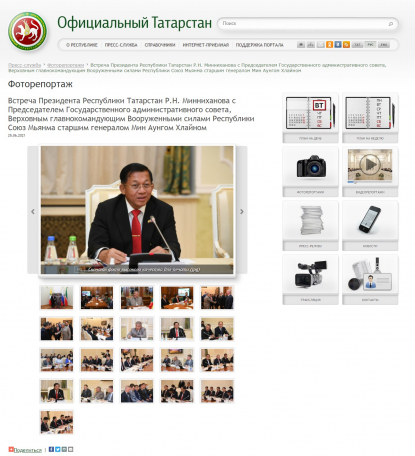 The Russian-language caption of the photo album reads: "Meeting of the President of the Republic of Tatarstan R.N. Minnikhanov with the Chairman of the State Administrative Council (SAC), Commander-in-Chief of Defence Services of the Republic of the Union of Myanmar, Senior General Min Aung Hlaing."

Below is a screenshot comparison of the Min Aung Hlaing's photo in the misleading post (L) and the photo on Official Tatarstan website (R):

The junta controlled Global New Light of Myanmar also reported here about Min Aung Hlaing's visit to the Republic of Tatarstan in June 2021.