A video has been shared hundreds of times on Facebook, Twitter and YouTube alongside a claim that it shows famous Indonesian song "Bengawan Solo" being sung during the closing ceremony of the 2020 Tokyo Olympics. The claim is false: this video actually shows the song being performed at a festival in China's Nanning city in 2019. Translated from Indonesian to English, the caption reads: “The song of Bengawan solo... not only known in some countries but now really all over the world... #MH 70,80,90 s,..Bengawan Solo .. at the closing of the 2020 Tokyo Olympics.”

"Bengawan Solo" is a popular Indonesian folk song composed in 1940.

The same video has been shared more than 390 times after it appeared with a similar claim in other Facebook posts, for example here, here, here and here.

The clip has been viewed more than 17,000 times after it was posted on Twitter here, as well as on YouTube here and here.

Dadi Feige is an annual gala for the Nanning International Folk Song Arts Festival, which is held in Nanning, the capital of Guangxi, an autonomous region in southern China.

Below are screenshot comparisons between the clip in the misleading post (L) and the original video (R): 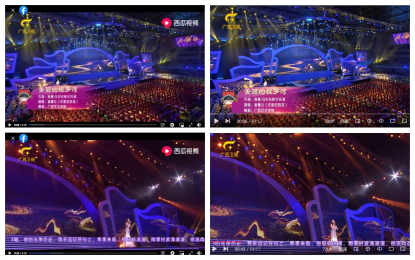 The Nanning government published an article about the 2019 festival here on its official website, mentioning the Indonesian singer Esther Helen, who sang "Bengawan Solo" during the festival.

The Indonesian ambassador to China, Djauhari Oratmangun, reposted the video of the performance here on his Instagram account on August 11, 2021.

Translated to English, the caption reads in part: “The song Bengawan Solo was sung live on GUANGXI Satellite TV at 'The 21st Nanning International Folk Song Art Festival "Flying on the Earth•2019"' ... which was held on 20 09 2019.

"The singer is called Esther Helen (Zeng Huilan 曾慧兰), @estherhelen13 from Indonesia. Esther was the third winner in China Got Talent 2019."