French police did not demonstrate against Covid-19 health pass

Social media posts are sharing a photo of police at a protest in France alongside the claim that officers sided with the demonstrators against vaccine "passports". This is false; police were there to secure the rally, not to take part in it, they and the photographer confirmed.

"France is on the brink of a revolution. Hospital workers are not only refusing the injection, they are refusing to administer it. Police are standing with the people as they protest against vaccine Passports," reads the caption of an August 9, 2021 Instagram post that has been "liked" more than 8,000 times. 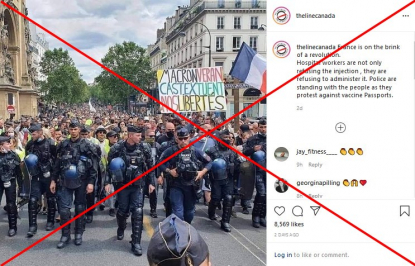 Posts showing the same picture have been shared thousands of times with similar claims in French and in Bulgarian.

Protests took place in France in July 2021 against Covid-19 public health measures, including the controversial "health pass," a proof of vaccination now required to access certain places including cinemas restaurants.

But the claim that police sided with the protesters is false.

"It is common practice for police officers and gendarmes to stand in front of and behind a procession of demonstrators in order to carry out their mission of securing the demonstration," the Paris Police Prefecture told AFP.

Police officers usually remove their helmets at times when there is no tension at a demonstration.

A reverse image search reveals that the photo was originally posted on Twitter on July 24, 2021 by Lucas Léger, a journalist for RT France, the French version of Kremlin-funded RT (formerly Russia Today). 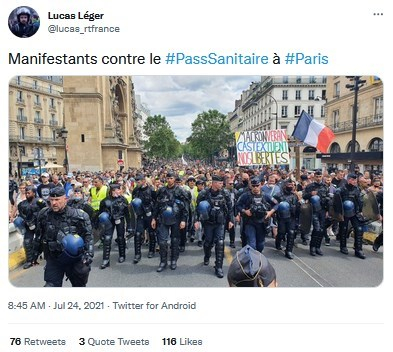 Contacted by AFP, Léger confirmed in a Twitter message that "they are mobile gendarmes and obviously they were not demonstrating but were framing the demonstration as closely as possible, as sometimes happens."

The photographer said that he took "the photo from this angle because you could see both the security arrangements and with the perspective you could see the scale of the march."

The photo was taken near the Porte Saint-Denis.

A July 24 video posted on Twitter shows how police cordoned off the protest (circled in red). The man in a blue shirt and sunglasses holding a large sign (circled in yellow) is also in the photo shared on Instagram along with the false claims. The video was shot moments before the picture, on Boulevard Saint-Martin.

Clashes erupted between police and the protesters that day, further contradicting the claim that officers took part in the demonstration.

Dozens of people were taken in custody and 29 officers were injured. 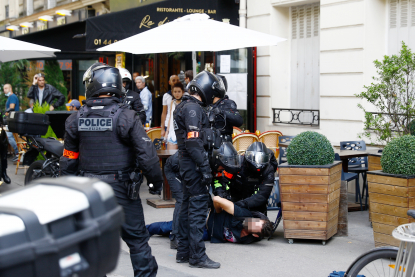 French police detain a protester during a demonstration against the government's proposed anti-Covid measures in Paris on July 24, 2021 ( AFP / Sameer Al-Doumy)

This is not the first time that pictures from protests have been used out of context to fuel disinformation about the pandemic.