Multiple social media posts have shared a claim that the Baduy indigenous community in Indonesia have never been vaccinated. This claim is false. The Baduy community have received various immunisations, from polio to diphtheria vaccines, and more recently Covid-19, according to local media reports and traditional leaders.

The claim was posted on Twitter here on August 1, 2021, and has since been retweeted more than 700 times.

Translated to English, the Indonesian-language tweet reads: “If vaccines are considered the only solution for all diseases, please look at and study the Baduy tribe and others alike. They have never been vaccinated for hundreds of years. Are they now wiped out by diseases? Have they suffered from physical disabilities because of polio? No, right”. 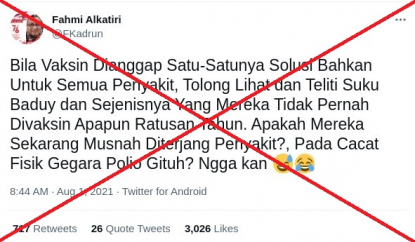 The Baduy refers a relatively isolated indigenous community who live in a district in Lebak regency in Indonesia's Banten province, in the western part of Java island.

The Baduy community remains free of Covid-19, despite a surge in Covid-19 cases in Indonesia since the country detected its first cases in March 2020, Indonesian media reported here and here.

Covid-19 has claimed more than 112,000 lives and infected more than 3.7 million people, according to the Indonesian Health Ministry data on August 11, 2021.

The claim has also appeared on Facebook here, here, here and here.

Indonesian state news agency Antara reported in March 2010 that Baduy children under five years old had been inoculated against various infectious diseases, such as polio, TBC, diphteria, hepatitis B and measles.

In a phone interview with AFP on August 10, 2021, Jaro Saija, a traditional Baduy leader and the head of Kanekes village, said that he and several "village apparatus" had received a Covid-19 vaccine.

He confirmed that there had not been any Covid-19 cases in Kanekes.

He saidt here was still opposition to vaccines from some villagers from "the most conservative members of Baduy community".

The Baduy community hasn’t reported any Covid-19 cases so far, thanks to adherence to the strict isolation policy and other health protocols, as reported here and here.