Two videos have been viewed millions of times on Facebook, TikTok and YouTube, along with a claim that they show Indonesian President Joko Widodo, popularly known as Jokowi, has resigned. The claim is false: the clips actually show Jokowi resigning as Jakarta governor before he was sworn in as Indonesian president in 2014.

It had been viewed more than 2.9 million times before it was removed.

Translated to English, the Indonesian-language text superimposed on the video reads: "Part 1: the resignation of Mr Jokowi". Jokowi is the popular nickname of Indonesian President Joko Widodo.

The identical video, along with a similar claim, was also posted on Facebook here.

Another video has been viewed more than 2.2 million views after it was shared with a similar claim on Youtube here, as well as on Facebook here. 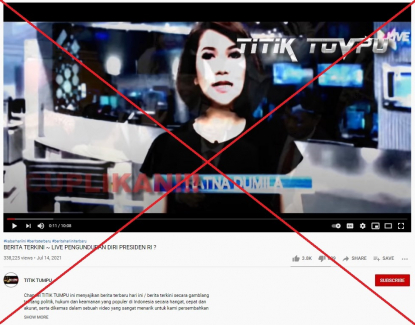 Screenshot of the second misleading post, taken on August 3, 2021

The video in the first misleading post was taken from this news footage, posted on the YouTube channel of Kompas TV on October 2, 2014, titled "Jokowi Resigns."

The first sentence of the post's caption reads: "Jakarta Governor Joko Widodo is resigning because Jokowi will be inaugurated as Indonesian President on October 20."

In the first 15 seconds of the video, the newscaster says: "Governor Jokowi is resigning today. He will deliver his resignation speech at a plenary session at the Jakarta legislative council."

Below is a screenshot comparison between the video in the first misleading post (L) and the first Kompas TV video (R):

Scenes in the video in the second misleading post match scenes in this Kompas TV video, posted on its YouTube channel on October 6, 2014.

It is also titled: "Jokowi Resigns."

The post's caption reads: "Jokowi's speech of accountability during his two years leading Jakarta was delivered at a plenary meeting at the Jakarta legislative council."

Below is a screenshot comparison between the video in the second misleading post (L) and the second Kompas TV video (R):

Jokowi's resignation as Jakarta governor in October 2014 was also reported by other Indonesian media, such as The Jakarta Post and Detik.com.

Jokowi, the then Jakarta governor, won the Indonesian presidential election in 2014. He is currently in his second presidential term after he was re-elected in 2019.

As of August 3, 2021, there are no credible news reports about Jokowi resigning as Indonesian president.