An image of a crash site has been shared multiple times on Facebook alongside claims that it shows a July 2021 crash of a military aircraft in Kaduna state, northwestern Nigeria. This is misleading: the image dates back to May 2021, and shows the spot of a military plane crash in which former chief of army staff Ibrahim Attahiru and 10 other officers died. The Nigerian Air Force explained that while one of its planes did crash in July, this incident occurred in Zamfara state, not Kaduna.

Multiple Facebook posts shared the image of a crash site (here, here and here) on July 18 and 19, 2021, alongside the claim that “another military aircraft” just crashed “somewhere in Kaduna State”. Citing an anonymous source, the posts say “the fighter jet left Yola, the Adamawa capital, this morning to go clear bandits (sic)”. 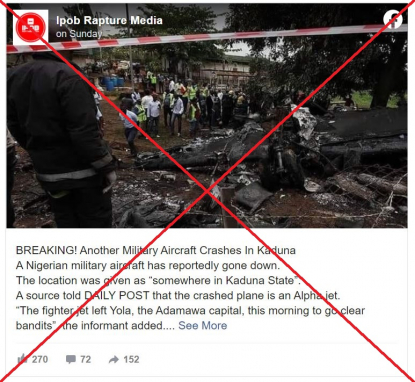 A screenshot taken on July 22, 2021, showing the misleading post

A reverse image search of the photo shows that it was taken in May 2021, and it indeed shows a crash in Kaduna, but not in July, as the posts claim.

The earliest version of the image was used by Turkish news agency Anadolu Agency on May 21, 2021. According to the agency, it shows the crash site where 11 military officers, including the former chief of army staff, were killed. AFP reported on the crash here.

Nigerian Air Force Spokesperson Edward Gabkwet said there was indeed a crash caused by bandits on July 18, 2021, but it was not in Kaduna.

“On 18 July 2021, at about 12.45 pm, a Nigerian Air Force (NAF) Alpha Jet aircraft, returning from a successful air interdiction mission between the boundaries of Zamfara and Kaduna State, came under intense enemy fire which led to its crash in Zamfara State,” Gabkwet said in statement.

He added that the pilot “successfully ejected from the aircraft”. 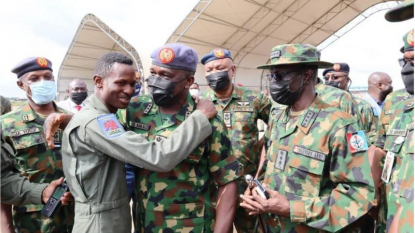 This is the fourth reported crash of a Nigerian Air Force plane in 2021 alone. The first was in February; the second in April was claimed by Boko Haram, and the third in May resulted in the death of the former chief of army staff.