Thailand has not hiked tampon tax to 30 percent

Social media posts shared tens of thousands of times claim that Thailand has introduced a 30 percent tax on tampons after classifying them as cosmetics. The claim is false: while tampons have genuinely been reclassified, the decision aimed to allow better quality and safety controls and the tax rate for tampons remain unchanged, the government said.

"Tampons are classified as cosmetics. That means the 7% VAT would be increased to 30%. It would be even more expensive," reads a Thai-language Facebook post from July 22.

The post shared a screenshot of an announcement by Thailand's Royal Gazette from July 19 reporting a health ministry decision to classify tampons as cosmetics. 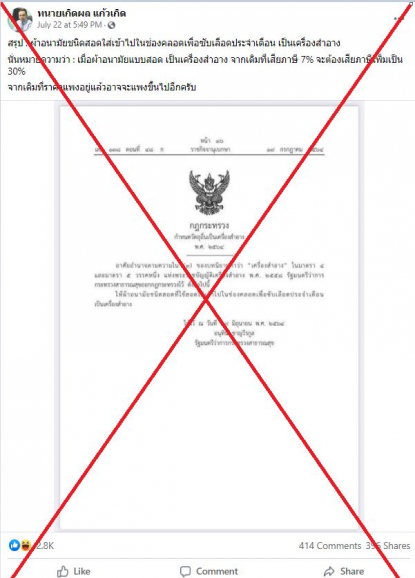 Similar posts were shared on Twitter here, here, and here, and on Facebook in a post shared more than 67,000 times before the user clarified that they had misunderstood the news.

Tampons were not previously classed as cosmetics, which according to this definition,covers products used to "apply", "powder", "spray" and various other "external" functions. Tampons are inserted into the body.

Despite this definition, the health ministry classified tampons as "cosmetics" on July 19 in a bid to improve consumer safety.

The FDA said the move would "ensure that the product meets safety standards, controls of microbial contamination including a warning on the label so that consumers can study and understand before using the product".

However, while cosmetics are usually classed as luxury goods, which have a 30 percent tax ceiling, tampons retained their status as controlled goods, which are taxed at a VAT rate of seven percent.

A government spokeswoman said the tax rate on tampons "would not be increased".

"Confirm that sanitary products are controlled products, so there would not be a tax increase," deputy government spokeswoman, Traisulee Traisoranasakul said in a Facebook post on July 22.

"Sanitary products are one of the lists of controlled products of the Ministry of Commerce. They are not taxed at the luxury goods tax rate or up to 30%. They will be charged with VAT on the price of the product like other products.

A spokesman for the Excise Department said the change in tampon's status was a health ministry initiative and did not change the amount of tax slapped on the product.

"The claim is not true," Natthakorn Utensute told AFP. "Tampons were categorised as cosmetics by the Ministry of Public Health."

"The misinformation must have come from the fact that the tax ceiling for cosmetics is at 30%," he said.

AFP has debunked a similar claim about taxation on sanitary pads in Thailand here.