Social media posts claim that South African kwaito musician Bonginkosi “Zola 7” Dlamini has died. This is false: the music star is alive and responded to the rumours in a video interview.

A Facebook post published on July 25, 2021, links to an article titled: Zola 7 Death – Dead: Zola 7 Cause of Death, Obituary, Funeral. The article has been shared more than 200 times on Facebook, according to social media monitoring tool CrowdTangle.

“We heard about the great loss, that our beloved person is no more and has reportedly passed away,” the post’s caption reads. “We are made to know about the death of the above name on July 25, 2021. We mourn with the family of Zola 7 for this great loss.” 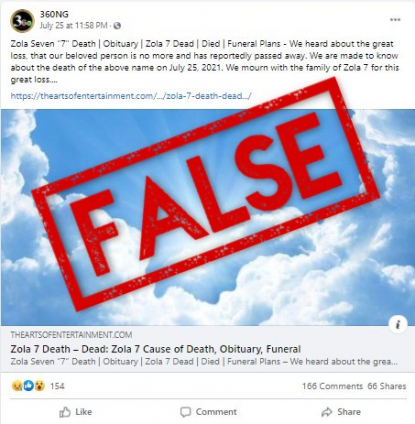 Some social media users quickly believed the worst. Weeks earlier, Dlamini revealed to South Africa’s City Press newspaper that he had been diagnosed with chronic epilepsy three years ago. 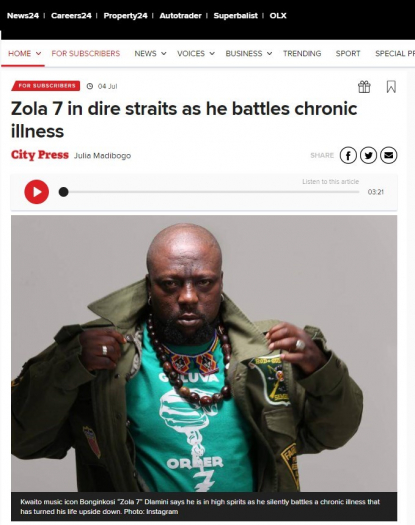 The musician discussed his health issues during a podcast interview released on May 6, 2021.

“I lost a lot of weight over the past year. I was extremely sick. I was home and I was shaking. Everybody around me was scared that I was going to die,” he said during the interview.

However, the claim that Dlamini has died is false.

To confirm the musician was alive and well, actor and television presenter Zola Hashatsi visited Dlamini and shared this proof-of-life video on Instagram on July 26, 2021.

The multitalented star is known for his numerous acting roles and dozens of hits, including Ghetto Fabulous, Mdlwembe, and Don’t Cry.

AFP Fact Check has reached out to Dlamini’s manager for comment. We will update this fact check if we receive a response.