As thousands rallied in France against plans to introduce a compulsory health pass, social media posts purported to show a photo of anti-vaccine protesters in the streets of Paris. The claim is false: the photo actually shows crowds of people celebrating after France won the World Cup in 2018.

"In France is game over, people stand up for Freedom and not Vaccinations!" reads a Facebook post from July 27. "Wake Up Australians Stop Sleeping !!! This is Freedom County Not Slavery!"

Thousands of protesters have rallied in France in recent weeks against the introduction of a health pass that will drastically curtail access to restaurants and public spaces for unvaccinated people. A government mandate requiring healthcare workers to get vaccinated has also sparked anger.

An estimated 160,000 protested across France on July 24, chanting "Freedom" and "No to the pass of shame" in a march that saw police deploy tear gas and water cannon against some demonstrators.

However, the photo was not taken during the recent protests, but during World Cup celebrations in Paris in 2018.

The photo was taken by AFP photographer Ludovic Marin on July 15, 2018 after France defeated Croatia in the final of that year's FIFA World Cup in Russia. The image can be found in AFP archives.

Below is a comparison of the photo circulating in misleading social media posts and the AFP photo. 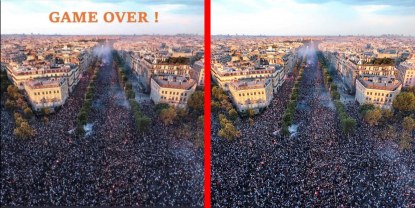 A screenshot comparison of the image uploaded to social media (L) the original taken by AFP Photographer Ludovic Marin (R).

"This picture taken from the top of the Arch of Triumph (Arc de Triomphe) on July 15, 2018 shows people celebrating after France won the Russia 2018 World Cup final football match against Croatia, on the Champs-Elysees avenue in Paris," the photo caption reads.

The location facing the Champs-Élysées, where the image was taken, can be viewed here on Google Street View.

Other images of France's World Cup win celebrations shared alongside misleading claims have been debunked by AFP here and here.