An image of a large crowd has been shared thousands of times in multiple posts on Facebook that claim it shows a rally held by a presidential poll candidate in North Central Sri Lanka. The claim is false; the image shows football fans who gathered in Paris in July 2018, on the day France won the FIFA World Cup. 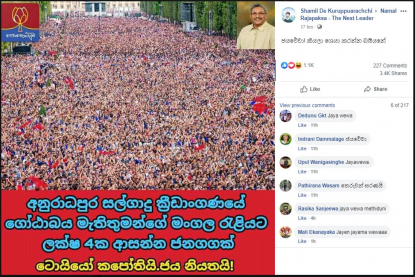 The Sinhala-language text superimposed on the image translates to English as:

“A sea of about 400,000 people gathered at the Anuradhapura Salgadu Stadium for Mr. Gotabaya’s inaugural rally. Toiyyas are ruined. Victory is certain!”

His inaugural political rally was held on October 9, 2019, at the Salgadu Stadium in Anuradhapura, a city located in North Central Sri Lanka.

“Toiyya” is a Sinhala phrase coined to troll supporters of the ruling United National Party (UNP).

The misleading post’s Sinhala-language caption translates to English as:

“Baiyya” is a Sinhala term used to describe supporters of the SLPP, Gotabaya’s party.

The same image was shared here and here on Facebook with a similar claim.

The claim is false; the photo shows a crowd who gathered in Paris on the day France won the 2018 FIFA World Cup.

The photo is credited to photographer Samantha Ohlsen.

Below is a screenshot of the image on the Alamy website: 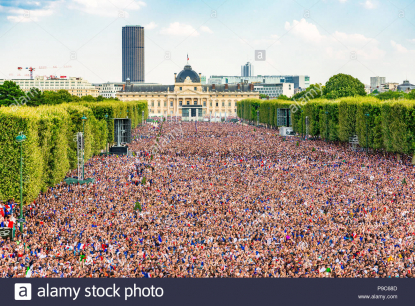 Below is a screenshot comparison of the image used in the misleading post (L) and the image on Alamy (R) with key identifying feautres highlighted in yellow by AFP:

A closer analysis of the two images shows the photo in the misleading post had been digitally manipulated, with patches of red added into the crowd, possibly in an attempt to mislead audiences into believing the image was taken at an SLPP rally.

Red is the official colour of the SLPP.

Below is a screenshot of the image in the misleading post with the areas which were digitally manipulated highlighted by AFP: 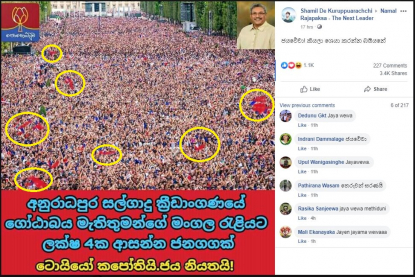 Some areas of the image in the misleading post had been digitally manipulated; they have been highlighted by AFP

The original photo was taken at Champ de Mars in Paris.

Below is a screenshot of the same location on Google Street View:

Social media abuzz in Nigeria over supposed presidential wedding. Here is what we know.