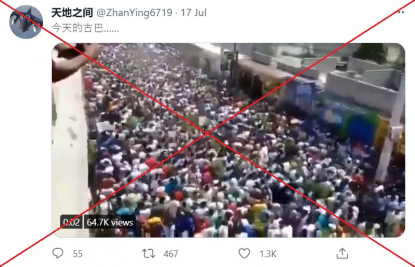 Thousands of Cubans joined rare anti-government protests on July 11, as the country faced its toughest phase yet of the coronavirus epidemic.

The footage has been shared in various languages alongside similar claims, including Chinese, Spanish, Portuguese and Romanian.

A reverse image search of keyframes from the footage, using the InVid-WeVerify tool, found the same video posted in this tweet from Russian media outlet Redfish.

It states the footage shows protesters in Haiti on October 13, 2019.

Tens of thousands of protesters have taken to the streets of Haiti against the government and the IMF. pic.twitter.com/X7hPiJ6QYc

An advanced Twitter search found the same video posted on the same day here, here and here in tweets about protests in Haiti.

The video was also tweeted by journalist Sandra Lemaire from Voice of America (VOA) on October 13, 2019.

The post says the video shows a "Haitian artists" march and credits the footage to Alexandre Joran.

Thousands of Haitians marched on October 13, 2019 to demand the resignation of demonstration then-president Jovenel Moise.

Anti-government demonstrations paralysed daily life across much of Haiti from September to December 2019, with anger at Moise -- whose victory in the November 2016 election was rejected by the opposition -- boiling over due to a national fuel shortage.