A screenshot of a tweet stating that the South African Health Products Regulatory Authority (SAHPRA) has approved ivermectin for use to treat Covid-19 patients has been shared hundreds of times on Facebook. But the claim is false: SAHPRA has not approved ivermectin as a Covid-19 treatment and only permits its use as a topical cream to treat skin inflammation among adults. Furthermore, a doctor must apply to use ivermectin to treat skin conditions in humans.

The screenshot showing a tweet by South Africa’s state broadcaster SABC was published here on Facebook on July 15, 2021, and has been shared more than 300 times. 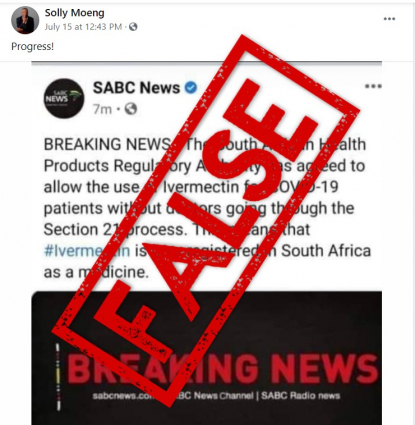 “The South African Health Products Regulatory Authority has agreed to allow the use of Ivermectin for Covid-19 patients without doctors going through the section 21 process,” reads the tweet in the screenshot. “This means that ivermectin is now registered in South Africa as medicine.”

According to the Medicines and Related Substances Control Act in South Africa, a Section 21 application is used to apply for a prescription of medicine not registered for human use.

Ivermectin is a medication most commonly prescribed for animals but is used to fight some parasitic infections in humans.

In the US, ivermectin tablets are prescribed to treat parasitic worms, and creams and lotions are used for conditions like head lice and rosacea. However, the US Food and Drug Administration (FDA) has not approved ivermectin to treat or prevent Covid-19.

Likewise, the claim that ivermectin has been approved for use in treating Covid-19 in South Africa is false.

SAHPRA spokesman Yuven Gounden told AFP Fact Check that the claim in the tweet was incorrect.

“The screenshot circulating online is an old news report that was retracted. We confirmed this with SABC,” said Gounden.

Gounden added that “SAHPRA agreed to allow doctors to use ivermectin for use by adults as a topical cream to treat skin inflammation and not for the management of Covid-19”.

He said this only applied in cases “deemed urgent” and “as soon as a Section 21 application has been submitted”.

Gounden’s comments echo a statement issued by SAHPRA in March 2021.

It further explained that ivermectin-based Soolantra cream had been registered, but only for adults with “moderate to severe inflammatory lesions of papulopustular rosace” and “not for the prevention or treatment of Covid-19”.

The statement concluded by saying that unregistered pharmaceutical products containing ivermectin were accessible only under SAHPRA’s “Ivermectin Controlled Compassionate Use Programme” through authorised suppliers. 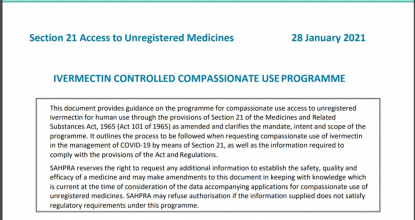 SAHPRA addressed the incorrect SABC headline and report in the same statement issued in March.

“The SABC placed an erroneous report that ‘SAHPRA’ has agreed to allow the use of Ivermectin for the treatment of Covid-19. This is grossly untrue, misleading to the public and irresponsible and could have dire consequences”.

SABC tweeted a correction on March 29, 2021 that read: “CORRECTION | The South African Health Products Regulatory Authority (SAHPRA) has confirmed registering a cream formulation that contains #Ivermectin. The ointment is for the treatment of moderate to severe inflammation lesions in adults and not for the treatment of COVID-19.”

CORRECTION | The South African Health Products Regulatory Authority (SAHPRA) has confirmed registering a cream formulation which contains #Ivermectin. The ointment is for the treatment of moderate to severe inflammation lesions in adults and not for the treatment of COVID-19.

On July 16, 2021, SAHPRA tweeted a warning cautioning the public against circulating the “old screenshot.”

AFP Fact Check has previously written about other misleading claims related to ivermectin use to treat Covid-19 (see here, here, here and here).