Crocodile digitally inserted into photograph of flooding in the Philippines

Shortly after torrential rains triggered flooding in north-central China on July 20, 2021, social media posts shared a photo purporting to show a crocodile swimming into a house in Henan city. The claim is false: the photo has been digitally altered to include an image of a crocodile. The original photo circulated online several months before the Henan floods in posts about flooding in the Philippines.

The misleading image was published here on Facebook on July 21, 2021.

It purports to show a crocodile entering a flooded house.

The post's simplified Chinese-language caption translates to English as: "#HenanRainstorm# Aquarium in Xingyang has broke, crocodile went out for a swim".

Henan is a province located in north-central China.

The same image was also shared alongside a similar claim on YouTube here, and on Chinese discussion forums here and here.

The claim is false: the image has been digitally altered to include a crocodile.

A reverse image search on Google has found the same photo published here by Facebook user Bobsteel B Gualiza on June 1, 2021.

It was shared from the Philippines.

The post's Visayan-language caption translates to English as: "We cannot go out because there's a visitor".

Gualiza told AFP that he created the image digitally for his own entertainment.

He also shared the original photo without the crocodile. 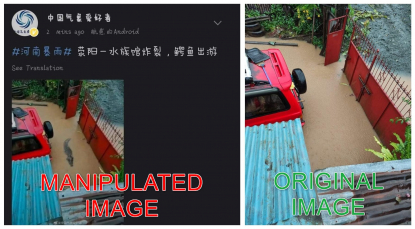 A screenshot comparison of the photo in the misleading post and the original image before it was digitally altered. ( AFP)

The photo was taken during a flood in the province of Agusan Del Norte, he said.