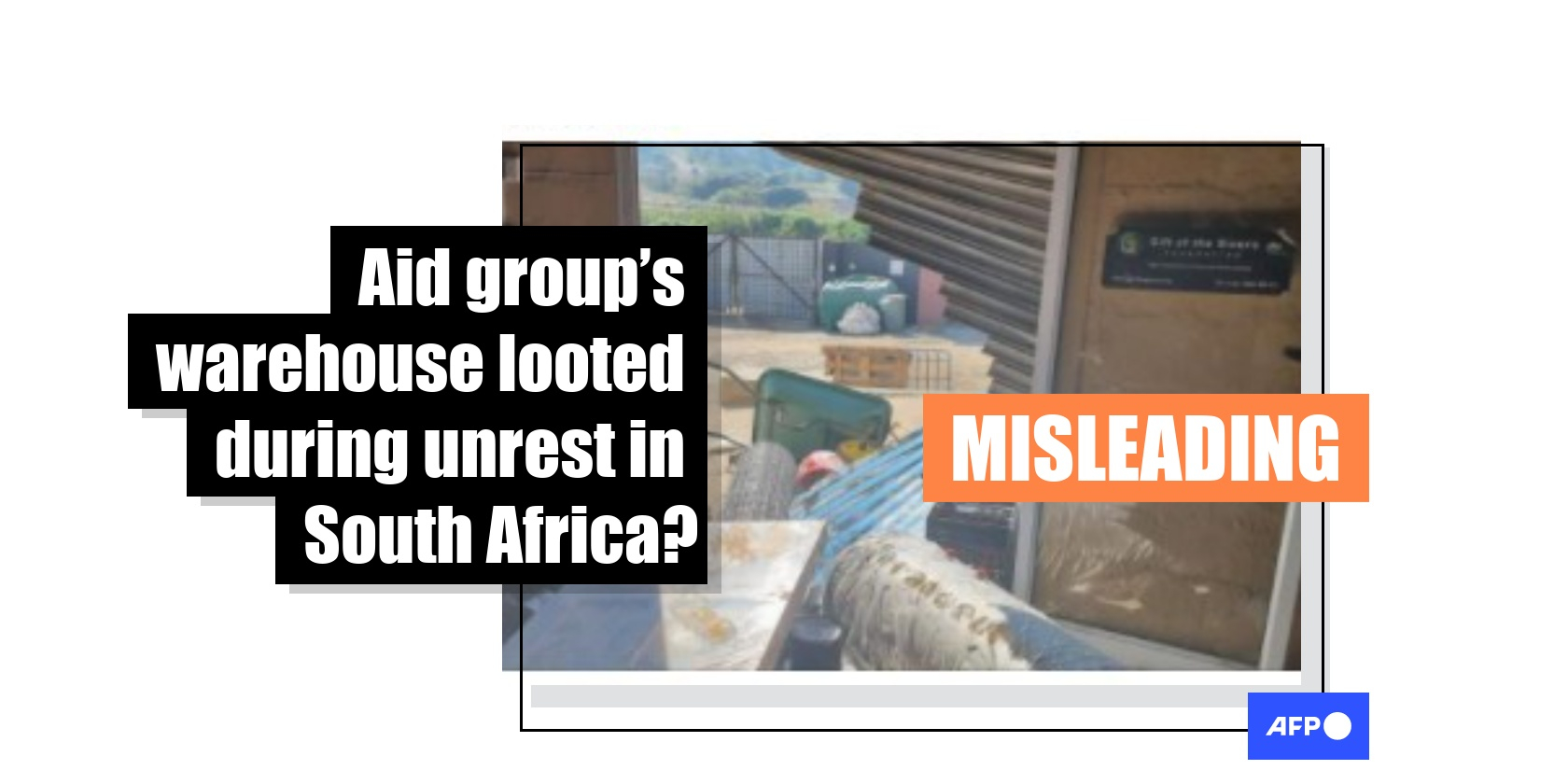 Social media users in South Africa responded with concern to Facebook posts claiming that a storage facility that houses supplies for the local aid organisation Gift of the Givers was ransacked by looters during the recent unrest. But the claim lacks context; while the images of the damaged warehouse in KwaZulu-Natal province are authentic, the organisation confirmed it stopped using the facility months ago.

A Facebook post shared more than 1,400 times since July 12, 2021, includes a picture of what appears to be a ransacked warehouse containing building materials and damaged roller doors. A sign for “Gift of the Givers” is visible on a glass door at the entrance.

“Gift of the givers has been looted (sic),” the post’s caption reads. 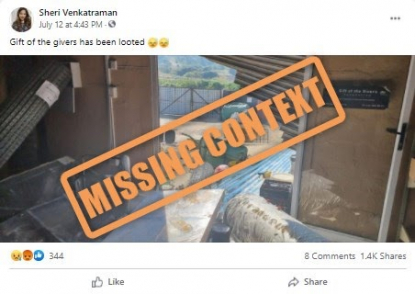 Other widely-shared Facebook posts featured the same claim, while expressing dismay that Gift of the Givers had been targeted (here and here). However, these posts have since been updated with more information.

Gift of the Givers Foundation is a non-government disaster relief organisation that has operated in and around the African continent for nearly three decades. It focuses on disaster response, alleviating hunger, water provision, healthcare, education and social upliftment.

The humanitarian aid group is also part of ongoing efforts to help the country recover from the recent spate of unrest and looting that was referred to in the misleading Facebook post.

After the posts about the looted warehouse began circulating, Gift of the Givers clarified on Facebook that the foundation wasn’t directly affected by the unrest.

“Dear South African's, we thank you for the concern you have shown over the looting of a #GiftoftheGivers warehouse (sic),” the post reads. “We bring to your attention that we no longer occupy the warehouse looted earlier today”.

“We haven't used it from January,” the organisation’s founder Imtiaz Sooliman told TimesLIVE on July 13, 2021. “It's not our warehouse. Our volunteer used it to store the goods we sent, and within a few days, distributed it. “Unfortunately he passed on in January, so we stopped using it. His family was still running his business.”

Sooliman added that the warehouse is in Port Shepstone, a town on the KwaZulu-Natal south coast.

“We haven't used it from January. It's not our warehouse. Our volunteer used it to store the goods we sent, and within a few days, distributed it. Unfortunately he passed on in January, so we stopped using it. His family was still running his business."

He was jailed on July 8, 2021, setting off localised protests that escalated in the following days, as mobs looted and rioted their way across the provinces of KwaZulu-Natal and Gauteng, home to the economic hub of Johannesburg. 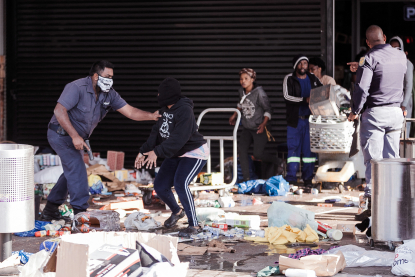 A total of 215 people were killed, acting minister in the presidency Khumbudzo Ntshavheni said on July 19, 2021, during a televised update.

“The situation in Gauteng (province) has completely stabilised,” she added. “In KwaZulu-Natal, the situation is now stable and no new incidents of looting were reported".

Six suspected instigators of the unrest were arrested, according to Ntshavheni.