Images of a large stock of ammunition have been shared thousands of times on social media alongside claims that they show 200,000 cartridges seized from arms smugglers in Nigeria. This is misleading; while this incident did indeed occur, it is not, as the posts suggest, recent. The images were taken in 2018 during the arrest of two men in central Nigeria who customs officials said were transporting ammunition to the country’s southeast.

On July 11, 2021, a Facebook page that shares content in support of Nigeria’s ruling All Progressives Congress (APC) shared the images and implied that they show a fresh arrest.

“Just In Nigerian Customs in Minna intercepted a truck load of 200,000 live ammunition that was about moving to the South East to supply for supplies security service (sic),” reads the caption of the post, which was shared more than 140 times. 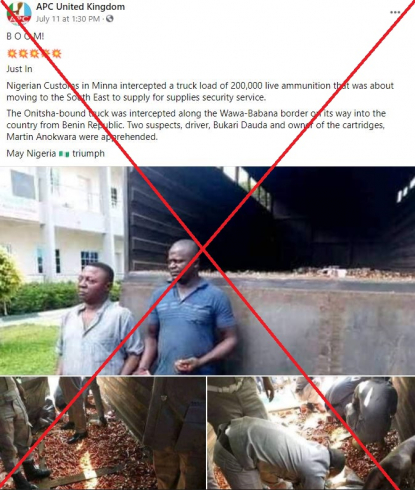 A screenshot showing the misleading post, taken on July 16, 2021

The same images have also been shared with identical captions on Facebook (here and here) and on Twitter here. The same post has been republished by blogs framing it as a fresh news item here and here.

A simple reverse image search shows that the images have been online since 2018. They were shared on Nigerian social media site Nairaland. They were also used in reports by local media here, here and here.

In 2018, the Nigerian Customs Service said two men -- Martin Anokwara and Bukari Dauda -- were arrested with 200,000 cartridges on their way from Benin Republic. According to local media, Anokwara said he brought in cartridges from Benin to sell to hunters and licensed gun owners in southeast Nigeria.

AFP Fact Check reached out to Nigeria Customs Service spokesperson Joseph Attah, who confirmed that the images were being shared afresh to mislead the public.

“What is making rounds on social media now is recirculation of old news just to cause unnecessary panic and fear,” he told AFP Fact Check. “There haven't been any recent seizures like that in that command,” he siad, referring to the Customs command working in Niger, Kwara and Kogi states.

Attah said the case has moved to court and is now out of the jurisdiction of the customs service. The federal high court has yet to release any updates on this case.