A post shared hundreds of times on Facebook in South Africa claims that the country’s police service had been replaced by the army in a bid to end a wave of deadly and destructive looting following the imprisonment of former president Jacob Zuma. But the claims are misleading: while it is true that soldiers have been deployed to quell the unrest, they have done so in a joint operation with the police and other law enforcement agencies.

The claim was posted on a Facebook page called “Break The Silence About South Africa” on July 12, 2021, and has since been shared more than 650 times. 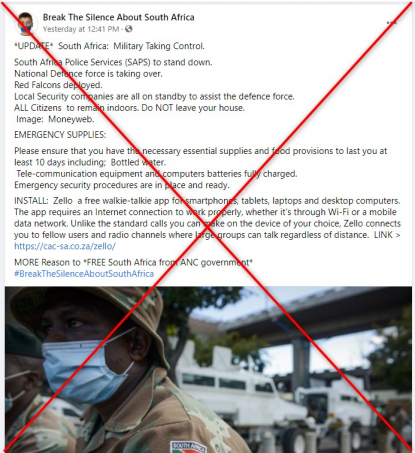 The post encourages people to stock up on basic food items, enough to last at least 10 days, and to remain indoors.

On July 12, 2021, the South African government announced the deployment of soldiers to help stem a wave of unrest ignited by the imprisonment of former president Jacob Zuma, who began serving a 15-month sentence for contempt of court after he failed to appear before a commission investigating corruption during his nine years as head of state.

Shops, malls and businesses in KwaZulu-Natal and Gauteng provinces have been looted and destroyed by mobs, with at least 72 people having died in the violence so far.

However, the claim that police are stepping aside for the army is misleading. 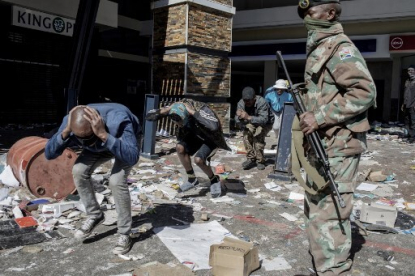 On July 14, 2021, President Cyril Ramaphosa met with leaders of various political parties in the country to discuss the unfolding unrest.

According to a statement from the Office of the President, Ramaphosa told the gathering that several areas of the country may soon run short of basic provisions such as food, fuel and medicine due to the unrest.

"Leaders urged that major transport routes be secured to allow fuel, food, medical supplies and other necessities to reach communities and that the 09:00-04:00 curfew be strictly enforced. The political leaders called for greater coordination among the police, the national defence force, intelligence agencies, private security services and community-based safety structures," the statement read.

The statement said that Ramaphosa welcomed proposals made by the political leaders. One proposal included increasing the number of the SANDF officers involved in the operation to restore order in the country. After the meeting, South Africa Minister for Defence, Nosiviwe Mapisa-Nqakula, boosted the number of deployed soldiers from 2,500 to 5,000.

In his announcement on July 12, 2021, Ramaphosa said soldiers would be deployed to the two troubled provinces to help other law enforcement agencies contain the unrest.

A statement issued by the army on the same day confirmed a joint operation with the police: “The South African National Defence Force has commenced with pre-deployment processes … to assist law enforcement agencies deployed in Gauteng and KwaZulu-Natal provinces … to quell the unrest that has gripped both in the last few days”.

The statement added that the duration of the deployment and the number of soldiers involved would depend on the circumstances. 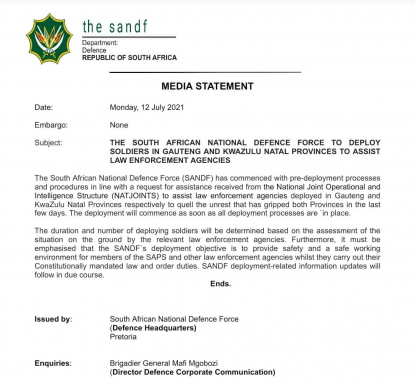 SANDF statement on the deployment of the military

Police spokesman Themba Lirandzu told AFP Fact Check that the police would work together with the army to restore order.

“Ministers from the Justice, Crime Prevention and Security (JSPS) Cluster recommended that the military be deployed to help the police in combatting the lawlessness that has been experienced in the country for the past few days, and that is what is happening,” said Lirandzu.

Media coverage of the violence in the days following the announcement shows policemen and soldiers working hand-in-hand. 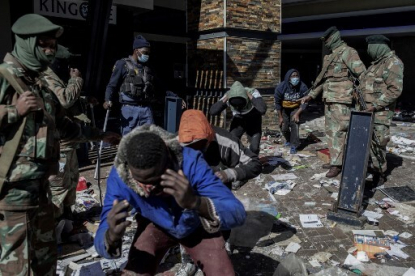 A South African soldier together with a South African police officer arrest suspected looters at the Jabulani Mall in Soweto on the outskirts of Johannesburg on July 13, 2021 ( AFP / LUCA SOLA)

Lizandru said the claim about  “Red Falcon” attack helicopters being used was unfounded.

The misleading post also urged people to stock up on basic items and stay indoors.

Again, police rejected the claim, saying that the government had issued no such statement.

“It is only the government that is mandated to issue a stay-home order, but there are no such messages from the government at the moment,” said Lirandzu, adding false information on social media was creating fear.