Skip to main content
A man is arrested during a demonstration against the government of Cuban President Miguel Diaz-Canel in Havana, on July 11, 2021 ( AFP / YAMIL LAGE)

Facebook posts claim a photo of tens of thousands of people marching down a wide city avenue shows ongoing anti-government protests in Cuba. This is false; the photo was taken in 2013 during a May Day parade in Havana that was organized by the Caribbean country's authorities. Major anti-government protests broke out in Cuba on July 11. One person has died and at least 100 were reportedly arrested during demonstrations -- the largest since the Cuban revolution of the 1950s.

However, the image shared on Facebook is not from 2021, and does not show a protest against the Cuban government.

A Google reverse image search found that the photo was originally published in a May 1, 2013 article on the Spanish-language website CubaDebate. Screenshot taken on July 14, 2021, of a photo on the website CubaDebate

The photo is credited to Ismael Francisco, who also wrote the article.

Headlined "President Raul Castro heads the May Day march," it describes the parade organized in Havana for the 2013 International Workers' Day.

The holiday is celebrated every year in Cuba, with state workers, students, retirees, and party officials marching to or from the city's Revolution Square. The photo shared on Facebook was taken on Avenida Paseo, a wide avenue that leads to the square.

The 2013 parade was organized under the theme of "prosperous and durable socialism," and commemorated former Venezuelan leader Hugo Chavez, who died in March of that year.

This AFP photo from the day also shows the large crowd. 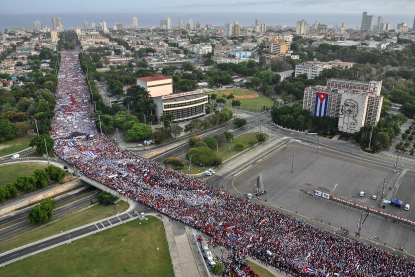 Cuban workers attend May Day celebrations at Revolution Square in Havana on May 1, 2013 ( AFP / STR)

AFP reported at the time that 300,000 people attended the march.

Other posts sought to inaccurately link a photo of the 2018 May Day parade in Havana -- taken by Alejandro Ernesto for the EFE news agency -- to the current protests in the Caribbean country. 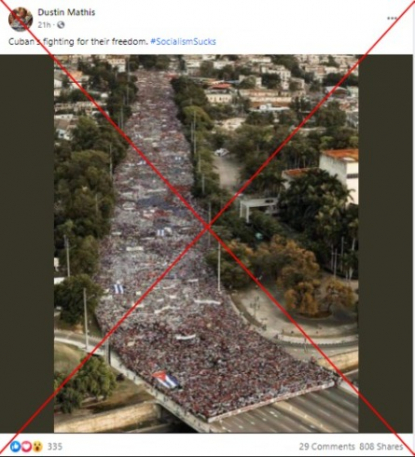 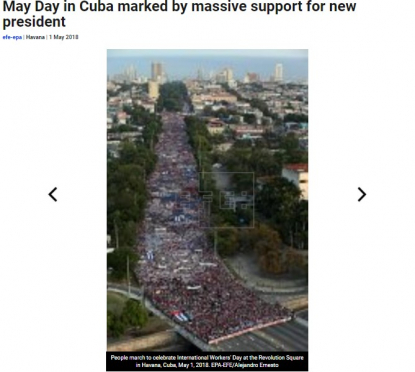