As Thailand sought to order Covid-19 vaccines to ease a national shortage, Facebook and Twitter posts accused Prime Minister Prayut Chan-O-Cha of receiving multiple doses of the shot, sparking pubic anger towards the leader who has already been criticised for his handling of the pandemic. But the claim is misleading: while two of the photos circulating online show Prayut receiving coronavirus jabs, the other two pictures were taken in 2017 and 2019, when he was vaccinated against the flu.

"I got vaccinated with one dose and had a high temperature at 37.8," reads a Thai-language Facebook post published on July 12.

"How many times has our PM got the vaccines?  Did you actually get it? Because it takes Thai people such a long time to get one dose."

The Thai text superimposed on the photo collage reads: "How many vaccine shots for our PM?" and "Obviously, he received four shots." 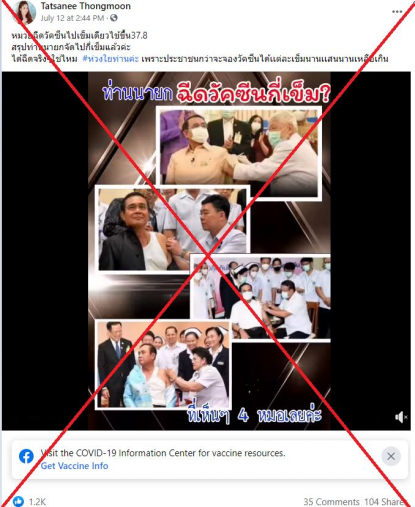 Prayut has come under criticism for his handling of the pandemic, from accusations of mismanagement of vaccine procurement to the lack of government compensation for affected sectors.

Thailand has defended plans to mix two different Covid-19 vaccines to battle a surge in infections, despite the WHO's top scientist warning it was a "dangerous trend" not backed by scientific evidence.

The four photos of Prayut's vaccinations -- which were also shared here and here -- sparked criticism from social media users.

"Some people can't even find a single dose, they wait for vaccines, wait to get tested, but you cut their queues," one person wrote.

Another branded Prayut a "liar".

However, the posts are misleading; two of the photos show Prayut receiving flu jabs before the Covid-19 outbreak.

A reverse image search on Google found the first photo in an article about Prayut receiving the first shot of his AstraZeneca Covid-19 jab.

"At 1.30 p.m. on March 16 at the Santi Maitri Building Government House, General Prayut Chan-Ocha, Prime Minister and Minister of Defense was the first person to receive the AstraZeneca jab. He gave the media an interview about the side effects, saying he didn't have any," reads the article by Thai news outlet Khaosod published on March 16, 2021.

The same photo appeared in a similar AFP report here.

A reverse image search followed by keyword searches found this YouTube video by Thai news channel Matichon TV from May 30, 2017, more than two years before the Covid-19 outbreak.

The YouTube video is titled: "Prayut receives three-variant influenza shots before discussing with the cabinet."

The photo in the misleading post corresponds with the footage from the video's 22-second mark.

Prayut can be seen wearing the same outfit and receiving a shot from the same medic.

A reverse image search found the third photo was published in this article by Thai news site The Standard published on May 24, 2021.

Keyword searches found the fourth photo appeared in this news report by Bright TV on August 6, 2019, months before the novel coronavirus outbreak was detected in Wuhan in December 2019.

Prayut Chan-O-Cha has been a regular target for misinformation. AFP has previously debunked claims about him here and here.