Social media posts in South Africa and Kenya shared pictures purporting to show former South African president Jacob Zuma in prison. But the posts are misleading; the photo has been digitally altered to add Zuma's face. The original image was taken in Pollsmoor Prison in Cape Town in 2002 during a visit to the prison by former Correctional Minister Ben Skosana.

The picture was posted here on Facebook in South Africa on July 9, 2021, and has since been shared more than 4,500 times.

The “Jacob Zuma deluxe” Facebook page that posted the image was created on April 26, 2021.

The image was also shared here on Facebook in Kenya on July 10, 2021. The caption reads: “Comrade Zuma is acclimatising well. Thanks to him, the correctional system in Azania experienced major reforms during his presidency. He made his bed and is lying on it (sic)”. 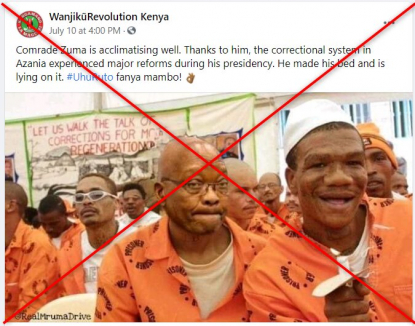 Screenshot of the post with the doctored image, taken on July 12, 2021

The image is stamped with the username @RealMrumaDrive, which is the handle of a Twitter user who posted it on July 8, 2021.

Zuma was taken into custody at the Estcourt Correctional Center on July 7, 2021, where he is serving a 15-month prison sentence.

South Africa’s Constitutional Court (Concourt), the country’s highest judicial court, ordered Zuma’s imprisonment in June 2021 after finding him guilty of contempt for failing to appear before a commission investigating corruption accusations that tainted his administration when he served as president from 2009 to 2018.

However, the posts are misleading; the original image does not feature Zuma. It has been digitally altered to add Zuma's face.

A reverse image search followed by a keyword search revealed that the original version of the picture was taken in Pollsmoor Prison in Cape Town, South Africa, in October 2002 during a visit to the prison by former correctional services minister, late Ben Skosana. The photo was taken by AFP photographer Anna Zieminski. 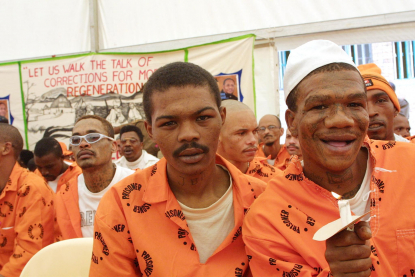 Zuma is not serving his sentence in Cape Town. He is at Estcourt Correctional Centre in Estcourt, KwaZulu-Natal.