This video shows a vandalised car dealership in the US, and is not linked to unrest in South Africa

A Facebook post shared thousands of times purports to show a video of a car dealership in South Africa being looted and vandalised. This is false: while South Africa is struggling to contain an outbreak of public disorder, the video was filmed in the United States in 2020.

The Facebook post, which has been shared more than 4,000 times since it was published on July 12, 2021, includes a video of several masked people, mostly in black clothes, vandalising cars in a showroom.

The caption mimics the format of an urgent traffic alert and claims to show a “video update” from Pietermaritzburg, the capital city of South Africa’s KwaZulu-Natal province where shops and businesses have been destroyed and looted by rioting mobs. 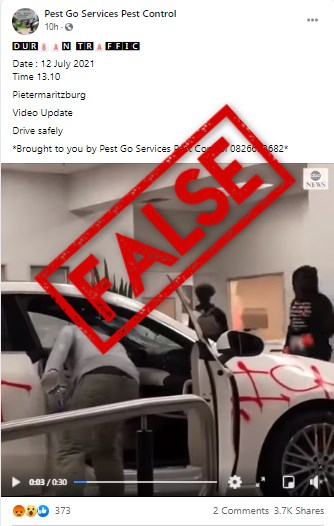 AFP Fact Check also received the video on WhatsApp with a message indicating it had been “forwarded many times”, an automatic threshold that limits how the content is further disseminated to help “slow down the spread of rumors, viral messages, and fake news”. 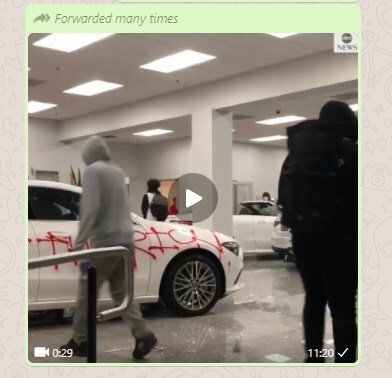 A screenshot of the same video, taken from WhatsApp on July 13, 2021

However, claims about the video are false; not only is it more than a year old, but it was taken in the United States. About 15 seconds into the clip, the name of the car dealership “Mercedes-Benz Oakland” pops up for a few seconds.

A Google search of the name brings up a car dealership in Oakland, California.

Another search for news related to the business shows several articles from June 2020 describing how looters caused millions of dollars in damage to the California-based Mercedes-Benz dealership.

Articles (here and here) linked the violence and opportunistic looting seen in the clip to protests that erupted following the murder of George Floyd, a black man who was killed by a white policeman in Minneapolis, United States.

This report added that the words “eat the rich” were spraypainted onto the showroom cars. The same phrase can also be seen in the video from the misleading post. 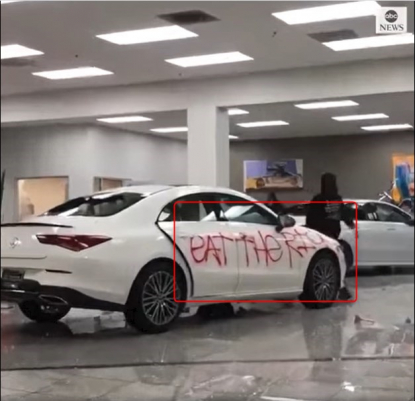 A screenshot of a vandalised car marked with the message "eat the rich", taken from the video in the false post on July 12, 2021

Unrest and violence in South Africa sparked by the imprisonment of ex-president Jacob Zuma earlier this month have escalated. As reported by AFP, South Africa’s army announced on Monday that it was deploying troops to two provinces (Gauteng and KwaZulu-Natal, where Zuma was jailed), and the economic hub of Johannesburg, to help quell mob violence and looting.

Police told AFP on July 12, 2021, that at least six people had been found dead in connection to the violence around the country, and more than 200 people have been arrested.

On June 29, the country’s top court sentenced Zuma to a 15-month term for refusing to comply with a probe into the corruption that stained his nine years in power. An application by Zuma for the court order to be rescinded is pending.

While some of the protests appear to have been triggered by Zuma’s incarceration, they have also taken place against a backdrop of steep unemployment and hardship inflicted by the toughening of Covid-19 restriction measures in South Africa.

South Africa’s President Cyril Ramaphosa condemned “attempts to create confusion by sharing false images and videos, often from events that took place many years ago,” in a televised address to the nation on July 11, 2021.

“I ask that you think carefully before sharing anything on social media or elsewhere that may not be accurate or verified,” Ramaphosa said.