Woman performing CPR on baby is the infant’s aunt, not a stranger

A photo has been shared thousands of times on Facebook in Nigeria alongside a claim that it shows a stranger performing life-saving cardiopulmonary resuscitation (CPR) on an infant in the United States. But the claim is misleading: the photographer who captured the dramatic moment in Miami, Florida in 2014, told AFP Fact Check that the woman in the image was the child’s aunt.

A post shared more than 10,000 times and published here on Facebook on March 23, 2021, claimed that a baby of five months had died after suffocating in a closed car but was brought back to life by a stranger who administered CPR on the child.

“The mother started crying and screaming, which attracted attention of passing by strangers including a young lady who took the baby from the mother and applied mouth -to- mouth breathing, within some few minutes the baby started breathing and crying, after the baby came back to life, the lady in the above picture disappeared no one knows who she is and where she came from (sic),” reads the caption. “That little baby is now 4 years old. 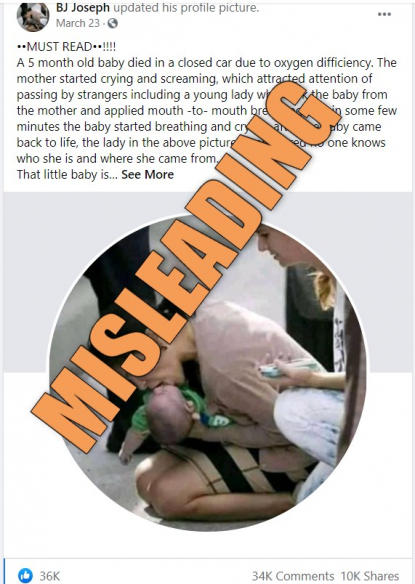 An image in the post shows a woman on her knees breathing into the mouth of a small child clasped in her arms. Another woman, partially cropped out of the picture, looks on.

While some aspects of the claim are true, other parts of it, however, are misleading.

Woman not a stranger

By conducting a reverse image search, AFP Fact Check found that the photo had been published online by several US-based news outlets in 2014.

The claim appears to have originated from this story aired on CBS on February 21, 2014, titled: “Baby rescued on Miami roadside by stranger who gave CPR”, although the news strap on the actual broadcast said the baby was saved by an “aunt” and “bystanders”.

The CBS report included the same image now circulating on Facebook. It credited Al Diaz from the Miami Herald for the photograph. At the time, Diaz was driving by, saw the unfolding drama and stopped to help.

Diaz, a member of the Miami Herald team that won the 1993 Pulitzer Prize for its coverage of Hurricane Andrew, told AFP Fact Check that “the claim on the Facebook post is obviously false” and confirmed Rauseo is Sebastián’s aunt.

He said that Rauseo was aided by Lucila Godoy —  the woman partially cropped out of the photo —  who stopped to help before the police and medics arrived.

Diaz shared his experience on his personal blog along with the picture he took. Screenshot of the original photo published in the Miami Herald in February 2014, taken on July 7, 2021

A follow-up report by the Miami Herald a few weeks later explained that doctors had subsequently discovered and removed three cysts from the infant’s trachea that were making it difficult for him to breathe.

The newspaper was also on hand when he celebrated his first birthday.