This picture was taken during Ethiopia's 1980s drought, not the current Tigray conflict

A photo has been shared hundreds of times on Twitter in Ethiopia alongside a claim that it shows a malnourished woman on the brink of death as a result of the ongoing war in the Tigray region. But the claim is false: AFP Fact Check found that the picture was taken during the 1984 drought in Ethiopia.

The photo has been shared more than 430 times since it was published on Twitter on June 15, 2021. 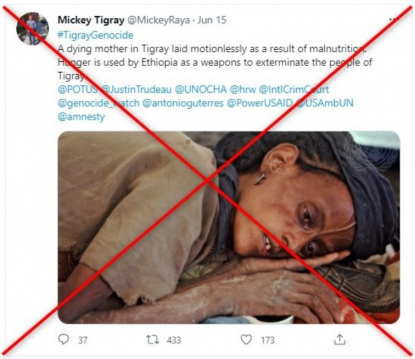 The photo shows a malnourished woman lying down.

“A dying mother in Tigray laid motionlessly as a result of malnutrition. Hunger is used by Ethiopia as a weapons to exterminate the people of Tigray (sic),” the post’s caption reads.

According to the United Nations, some 5.2 million people are now in need of food assistance as a result of the Tigray conflict.

By conducting a reverse image search, AFP Fact Check found that the photo in the misleading post was published on the UN’s digital archives website. The picture is credited to photographer John Isaac. As the caption indicates, it shows a malnourished woman who was awaiting medical treatment at a camp in Makalle (also known as Mekelle) in northern Ethiopia during the country’s 1984 drought.

In the early 1980s, Ethiopia was hit by an extreme drought that spiralled into famine. The disaster claimed around one million lives and affected millions of others as the then-government of Mengistu Haile Mariam battled rebels led by Meles Zenawi who went on to become the country's president and later prime minister.