An image has been shared hundreds of times in multiple posts on Facebook which claim it shows a government text message about a new coronavirus contact-tracing app in Australia. The claim is false; Australian authorities said the purported text message was a hoax; the Australian Federal Police said it had launched an investigation.

The image of the purported text message was published on Facebook here on April 27. It has been shared more than 350 times.

COVIDSafe was designed to facilitate COVID-19 contact-tracing in Australia. It was launched on April 26 as part of the government’s plan to ease social distancing restrictions. More than two million Australians downloaded and registered for the app within 24 hours of its release, Health Minister Greg Hunt said in this press release on April 28. 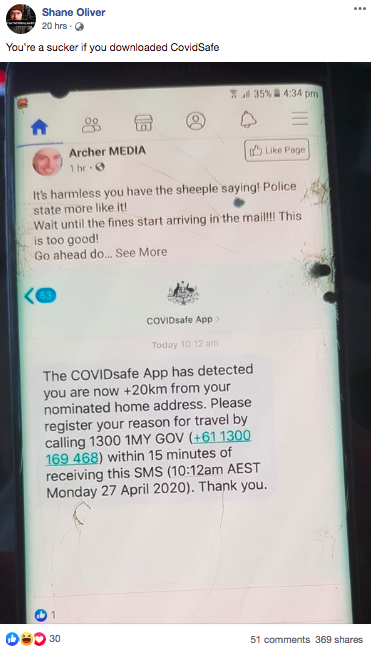 Images of the purported text message were also shared hundreds of times on Facebook here, here, here and here alongside a similar claim.

“This is a hoax message," a spokesperson for the Department of Health told AFP in an email on April 28. "It is abhorrent that scammers would attempt to use the COVIDSafe app, a public health tool, to try and catch out Australians.

“The COVIDSafe App does not have any geolocation capability, it does not track your location, only the proximity of your phone to other people’s phones that have downloaded the app and cannot monitor a person’s location at any time.”

The app, as AFP reported, instead uses smartphones’ Bluetooth function to detect other users nearby and can alert users if they were in close proximity to someone who tested positive for COVID-19.

The spokesperson added that the app “does not register a person’s home address” and that personal information is only released to relevant health officials with users’ authorisation.

Scamwatch, a website run by the Australian Competition and Consumer Commision, also told AFP in an email on April 28 that the “text message is a hoax.” The consumer watchdog has published several other instances of scam text messages related to COVID-19 on its website here.

A spokesperson for the Australian Federal Police told AFP in an email on April 28 that police were “aware of an alleged hoax involving the COVIDSafe App" and were "currently investigating the matter."

The hoax circulated as the government continued its efforts to alleviate privacy concerns related to COVIDSafe.

Health Minister Hunt stressed in his April 28 statement that “no one, not ever the user”, can access the app’s encrypted Bluetooth interaction records.