Multiple Facebook posts shared hundreds of times on Facebook in November 2020 claim an inquiry has been set up to investigate fraud in Myanmar’s election, and that Myanmar’s army will soon announce the “true” election results. The claim is false; as of November 18, 2020, there have been no official announcements of such an inquiry.

The misleading post was published here on Facebook on November 10, 2020. It has been shared more than 400 times. 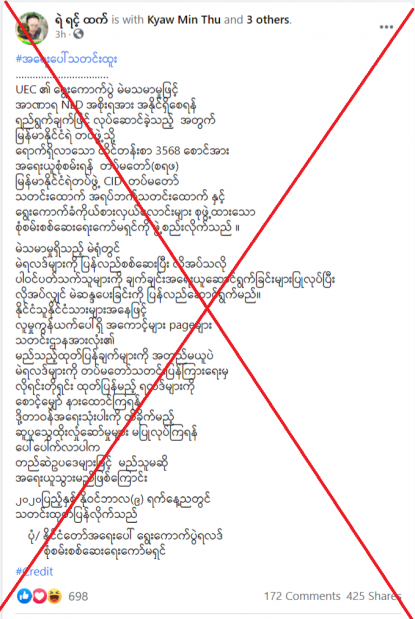 “People should not believe the election results from any media, accounts and pages on social media. Please wait and listen for announcements from the Tatmadaw true news team.”

“Tatmadaw” is a reference to the Myanmar army.

The general election in Myanmar was held on November 8, 2020, as reported by AFP here.

In an interview on November 11, U Kyi Toe, a member of the NLD party's Central Information Committee, said the posts appear to have originated from “unreliable sources”.

He told AFP: "We need to find out how reliable the source of the misinformation is. And setting up an inquiry commission is up to the president at the union level. Therefore, I would like to ask people to be wary of such unreliable sources.”

The Myanmar military released this statement on Myanmar’s peace process on November 9, 2020, in which it made positive comments about the election. It states, in part: “The 2020 general election has been successfully held and the COVID-19 disease outbreak is under control to an extent.”

Multiple keywords searches found no statements about forming an “election inquiry commission” on the army’s official information team website and other government websites including the President’s Office and State Counsellor Office pages.