Skip to main content
A health worker displays a vial of polio vaccine during a government-run vaccination drive in Manila on October 14, 2019. (AFP / Ted Aljibe)

Hoax circulates online that vaccines have caused deaths in the Philippines

Multiple Facebook and Twitter posts shared thousands of times in August 2020 claim that five people in the Philippine city of Tarlac died after receiving vaccine shots. The claim is false; the Tarlac City government and the Philippine Department of Health said the claim was “fake”; the World Health Organization (WHO) said the polio vaccine that was administered across the Philippines in August 2020 was safe.

The claim was published on Facebook here on August 9, 2020. The post has been shared more than 3,700 times. 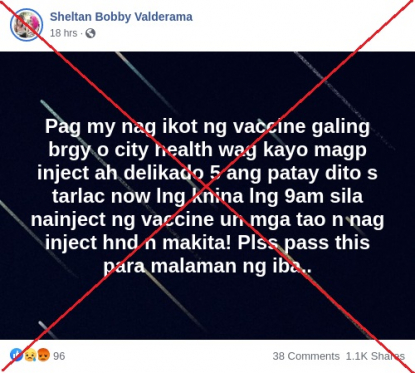 A screenshot of the misleading post taken on August 10, 2020

The post reads: "If someone from the village or the city health [office] does the rounds to vaccinate do not get injected it's dangerous 5 people died here in tarlac now just earlier at 9am they injected vaccines those who administered the vaccine could no longer be found! Plss pass this so others know.."

The post circulated within weeks of the Philippines resuming its polio vaccination campaign in late July. Vaccinations were halted earlier in 2020 due to the novel coronavirus pandemic.

As part of the campaign, health officials in Tarlac City, which is about 130 kilometers north of the capital Manila, conducted house-to-house visits to administer the vaccine, according to this local report on August 6, 2020.

In response to the misleading posts, the Tarlac City government issued this statement on Facebook on August 9, 2020, saying the claim was “fake”.

"#FakeNewsAlert: THERE IS NO TRUTH to circulating reports about the death of 5 people because of vaccines from Village and Health Centers,” the Tagalog-language statement reads.

Below is a screenshot of the statement, which includes a photo of the misleading post, stamped “FAKE NEWS”: 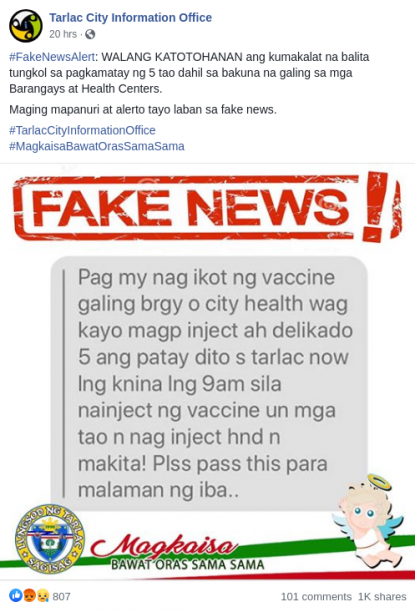 Dr. Maria Rosario Vergeire, a Philippine Department of Health undersecretary, also said the claim in the misleading posts was false.

“It was tagged as fake already by our Regional Office,” Vergeire told AFP in a Viber message on August 10, 2020.

The WHO's Philippine office told AFP the vaccine used in the government’s anti-polio campaign had been proven to be safe.

“The oral polio vaccines used in the campaigns are very safe and have been used extensively in many countries across the globe for several years,” a WHO Philippines representative said in an email on August 10.