Skip to main content
Restaurants and shops in the commercial marina area of the Fremantle Fishing Boat Harbour complex sit deserted as people stay at home to stop the spread of the COVID-19 coronavirus in the port city of Fremantle, near Perth, Western Australia, on March 27, 2020. (AFP / Tony Ashby)

Multiple Facebook and Twitter posts shared hundreds of times claim the Australian state of Western Australia has recently passed a “COVID-19 Emergency Powers Act” that authorises forcible medical examination and vaccination in schools. The claim is misleading; a spokesperson from Western Australia’s Department of Health told AFP no such law has been passed during the pandemic; as of May 2020, the state has no COVID-19 vaccine programme.

The claim was published in this May 17 tweet. It has been retweeted more than 270 times.

It states, in part: “Western Australia / They just passed a Covid 19 Emergency Powers Act That will authorize officers to test & vaccinate children at school - this includes removing their underwear.”

The tweet features four images: one with text that echoes the caption, and the other two are purported excerpts of legislation about medical examination and treatment, with sections about vaccination and the possible removal of “anything, including underwear” during the process highlighted yellow.

The fourth image shows a supposed copy of a “declaration of public health state of emergency in respect of COVID-19” signed on March 16, 2020, by Roger Cook, the health minister of Western Australia (WA), a state in Australia. 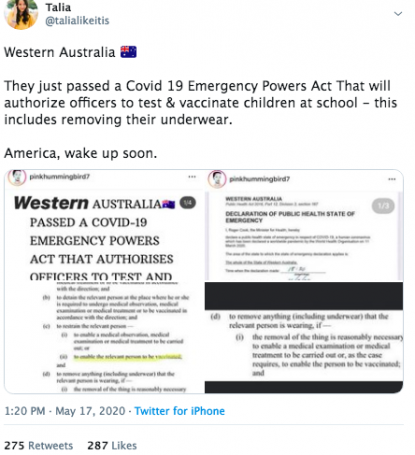 A screenshot taken on May 20, 2020, of the misleading tweet by user talialikeitis

The claim was also shared hundreds of times on Twitter here, and on Facebook here, here, here and here.

The claim is misleading; as of May 2020, Western Australia has not passed any vaccine legislation in the wake of COVID-19 and has no COVID-19 vaccine programme in place.

However, the declarations were made under the Emergency Management Act 2005 and Public Health Act 2016; neither of those were passed recently as suggested in the misleading posts.

A spokesperson for WA Department of Health told AFP in an email dated May 19: “There is no such Act recently passed. WA is currently in a declared public health state of emergency, and a state of emergency under two different Acts -- but these have been in place for some time.”

Two of the images in the misleading posts highlighted portions of section 158 of the Public Health Act 2016 to illustrate that vaccination can be forced upon children at school and their underwear may be removed.

Western Australia’s current school-based immunisation program is part of the country’s voluntary National Immunisation Program, which offers free vaccines to eligible people to “to reduce the number of cases of diseases that are preventable by vaccination in Australia.”

“There is no vaccine for COVID available in WA schools or anywhere else,” the WA Department of Health spokesperson added. “However there is a research study that will occur in some WA schools… The research study above is voluntary.”

A media release from the Western Australia government published here on May 1 explains that the study aims to “test for COVID-19 in schools and psychosocial impacts of the virus” and consists of three stages, including COVID-19 tests at monthly intervals over a period of three months, contact tracing and surveys to examine the psychosocial impacts of the pandemic among students, their parents and teachers.

“The current testing for COVID-19 involves obtaining nose and throat swabs, which are sent to the laboratory for testing. This is the process for the school based research study above,” the WA Department of Health spokesperson said. They added that the removal of clothing is not necessary for the study, and children will not have their clothes removed against their will.