Henry Kissinger did not urge mass vaccination in 2009 speech

Dozens of posts on Facebook claim that Henry Kissinger made a speech urging mass vaccination, saying it would pave the way for other radical health policies, including the genetic modification and forced sterilization of children. This is false; his office said the claim is “a complete fabrication,” there is no record of him making such remarks, and the group that he allegedly addressed does not exist.

“Once the herd accepts forcible mandatory vaccination, it’s game over! They will accept anything -- forcible blood or organ donation -- for the ‘greater good,’” posts such as this one quote the former diplomat, who remains a major figure on US foreign policy matters, as saying.

The claim appears to have first surfaced in 2019 but posts making it continue to circulate on social media, gaining fresh traction in March 2020. All involve memes of Kissinger, a former US secretary of state, and some say he made the speech to the World Health Organization Council on Eugenics on February 25, 2009. 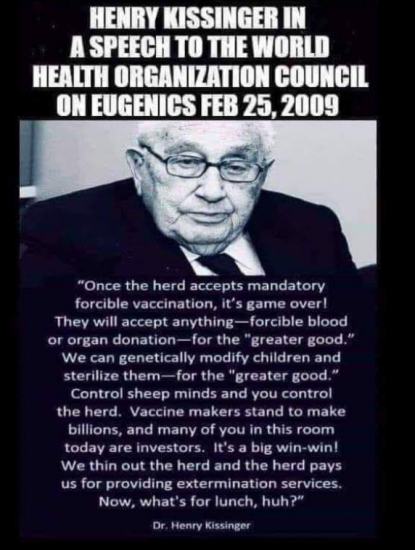 “It is a complete fabrication,” Courtney Glick, an assistant to Kissinger at New York-based global advisory firm Kissinger Associates, told AFP in an email.

Eugenics is the study of human population control and techniques to reproduce characteristics that the movement’s advocates consider desirable. However, there is no such entity as the World Health Organization Council on Eugenics, nor has there ever been.

A search of Kissinger’s speeches and interviews from public records as well as his personal archives found no remarks made on February 25, 2009. Nor are there any media reports of him addressing the topics mentioned in the posts.

He did speak at the 45th Munich Security Conference, on February 6, 2009, but his main topic was nuclear proliferation, not any of the subjects cited in the posts shared on Facebook.

However, some users date the remarks to 1974 and a report by Kissinger on world population growth. The paper was declassified by the White House in 1989. It does not make any of the suggestions the posts claim Kissinger wanted.

Years of campaigns by anti-vaccination groups are among reasons given by health experts for a rise in some disease infections. The World Health Organization has said that measles cases, for example, have surged in recent years.

“Control sheep minds and you control the herd,” the posts about Kissinger claim he said. “Vaccine makers stand to make billions, and many of you in this room are investors. It’s a big win-win.”

The more recent posts coincide with the global spread of the novel coronavirus and the push among scientists for a vaccine, which may explain the spike in claims that Kissinger made the speech.

On March 4, 2020, AFP Fact Check debunked claims pushed on social media by anti-vaccine advocates that falsely represented a photograph from a British diabetes awareness poster to say that newborns received an outsized number of vaccine injections in 2019.