Skip to main content
Volunteers pack hand sanitizer and disinfectat that will be distributed for free in Guadalupe, Nuevo Leon, Mexico on March 18 2020, as a preventive measure against the spread of the new coronavirus, COVID-19. (AFP / Julio Cesar Aguilar)

A video has been viewed thousands of times on Facebook alongside a claim it shows how to make a hand sanitiser that is effective in protecting against the novel coronavirus, COVID-19. The video appears to show someone mixing rum, bleach and fabric softener in a bottle before rubbing the solution on their hands. The claim is false; health experts warn that such homemade hand sanitisers can be harmful to a person's health. 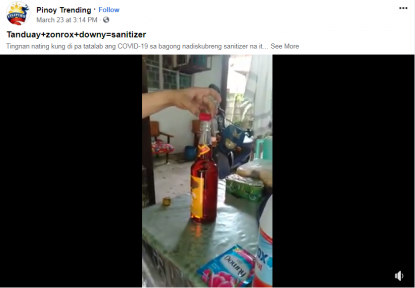 It appears to show a person mixing Zonrox-brand bleach with Tanduay, a brand of rum produced in the Philippines. A voice speaking in Visayan, a Philippine language, can be heard saying that adding fabric softener to the mixture can help mask the smell. The person is then seen rubbing the mixture onto their hands.

COVID-19 was first detected in the Chinese city of Wuhan in late 2019. It has since killed more than 30,039 people and infected 638,146 others worldwide, according to data from the World Health Organization on March 30, 2020.

The WHO has recommended the use of alcohol-based hand sanitiser to protect against infection.

The claim is false; health experts warn the mixtures shown in the videos are potentially harmful to health and are not effective in protecting against COVID-19 infection.

In response to the misleading videos circulating online, the Integrated Chemists of the Philippines (ICP) issued a statement on March 23, 2020 saying the homemade mixture is not an effective hand sanitiser.

The ICP released another statement highlighting the dangers of the solution on its Facebook page on March 24, 2020, alongside a screenshot of one of the misleading videos.

Part of the release reads: "Don't Imitate. Deadly. Mixing bleach and alcohol creates chloroform, a chemical that is dangerous and toxic when inhaled or rubbed on skin." 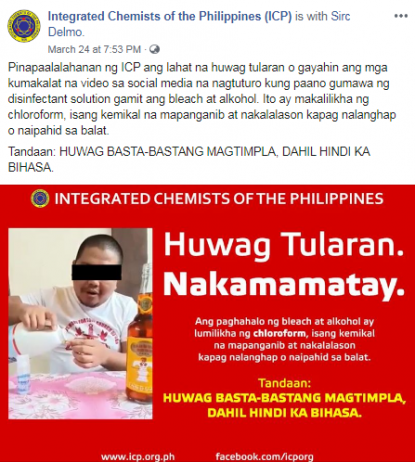 It adds that hand sanitisers "shall be compounded using only pharmaceutical-grade ingredients", and that the agency "strongly discourages the addition of other ingredients... as these may impact the quality and potency of the product".

Below are screenshots of the relevant sections of the government recommendation:

Tanduay, a Philippine rum manufacturer, and Green Cross, the company that produces Zonrox bleach, both issued warnings against using the mixture.

Tanduay issued a statement on its Facebook page on March 23, saying it “strongly advises against mixing Tanduay Rhum with bleach, hand sanitiser or other chemicals. This WILL NOT produce a viable disinfectant against the COVID-19 virus. On the contrary, this may cause serious harm, therefore should not be attempted.”

Below is a screenshot of the Tanduay release: 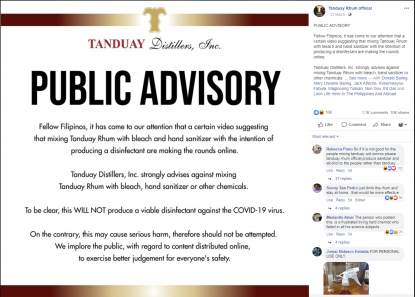 Green Cross released a similar warning, that states, in part: “We strongly advise everyone not to follow nor believe the video. Mixing bleach with ethyl alcohol (present in rum) will form a dangerous chemical that has toxic effects if ingested, inhaled or absorbed through skin. Therefore the resulting solution is not acceptable as a disinfectant.”

Below is a screenshot of the Green Cross statement: 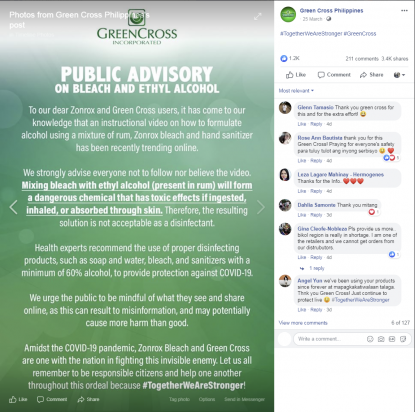