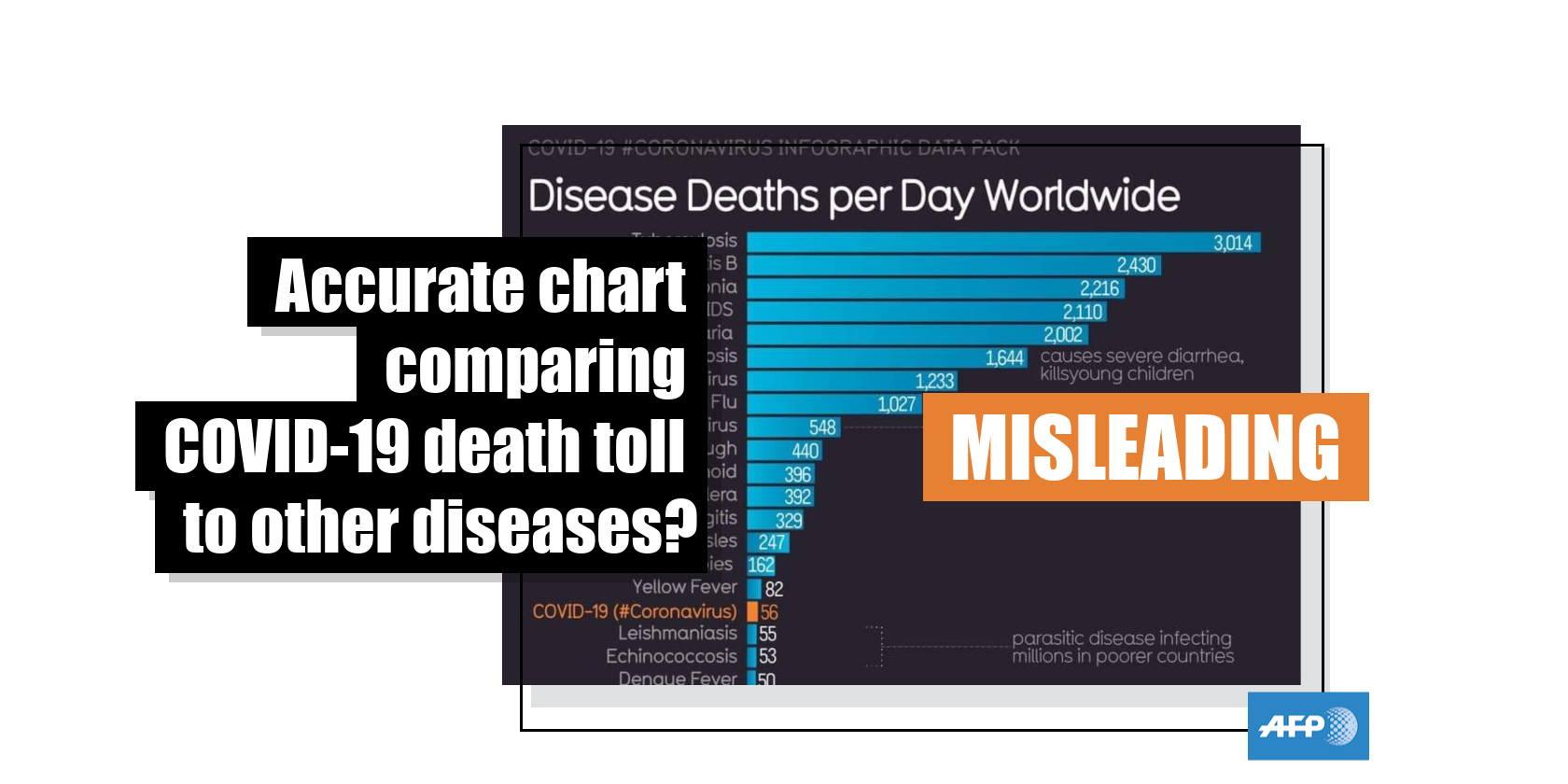 A chart has been shared thousands of times on Facebook and Twitter alongside a claim it shows the seriousness of the novel coronavirus epidemic has been exaggerated when its death toll is compared to other diseases. But health experts say the graphic is misleading and risks underplaying the danger of the novel coronavirus, COVID-19, which is a new disease with a fast-rising mortality rate.

The post features a chart, titled “Disease Deaths per Day Worldwide”. It purports to compare daily mortality rates of COVID-19 and other fatal diseases, including tuberculosis, HIV/AIDS, and seasonal flu. 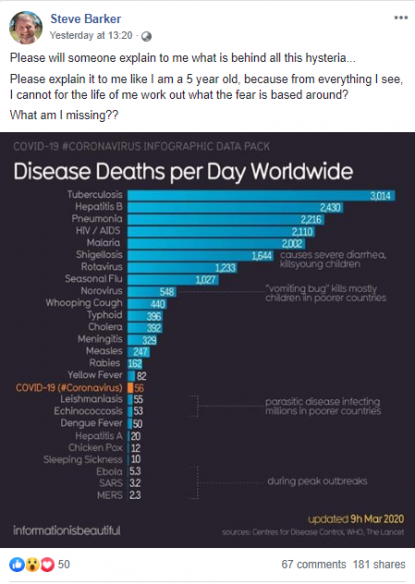 The chart is one of several graphics published by “Information Is Beautiful”, a website managed by the UK-based graphic designer David McCandless, which originally published the visualisation in a March 9, 2020 Facebook post here and on its website here.

The novel coronavirus, COVID-19, was first detected in the Chinese city of Wuhan in late December 2019. The virus has killed more than 6,000 people and infected 163,930 worldwide, including sports stars, celebrities and world leaders, AFP reported here on March 16, 2020.

The chart has also been shared here and here on Facebook; here, here, here, and here on Twitter with a similar claim. It was also shared in this Reddit post, where users debated whether it was reliable.

The claim is misleading; experts say it is misguided to compare a newly-formed disease such as COVID-19, which has a rapidly growing mortality rate, with other longstanding diseases.

Brian Zikmund-Fisher, a risk communication expert at the University of Michigan School of Public Health, told AFP by email on March 13, 2020 that the misleading chart could mistakenly result in people perceiving the risks of COVID-19 to be minor by comparison to other diseases.

“Comparing a rapidly spreading disease to conditions which have stable prevalences is an unfair comparison, and it leads the audience to perceive the risk of SARS-CoV-2 as ‘low’ in gist despite its incredible potential to overtake all of these in a very short period of time. What we need (and I have seen) is more graphics showing the time trends,” he said.

Zikmund-Fisher questioned the choice of data used to create the graphic.

“Many of these graphics created by this organization are quite good, actually (e.g. those describing the differential mortality rates by age or by country). But the one you called out is problematic because the rest of the bars represent persistent rates of disease that are not changing much over time whereas COVID-19 infections are exploding exponentially at the moment,” he added.

“The same data in a table would still be true and still be misleading people's interpretation of how much they should be worried / act.”

According to the US Centers for Disease Control and Prevention, the history of tuberculosis can be traced back to 1882, HIV to the 1880s and seasonal flu to at least the 1930s.

Carl T. Bergstrom, a professor of biology at the University of Washington, said the graphic makes an “apples to oranges” comparison.

The World Health Organization (WHO) states COVID-19 was first detected in Wuhan, China on December 31, 2019.