A graphic attributed to the state-run Philippine News Agency (PNA) that features a purported quote from Philippine President Rodrigo Duterte has been shared in multiple posts on Facebook. The graphic claims that Duterte said the government has completed distributing cash assistance to those affected by the novel coronavirus pandemic. But the graphic has been doctored; it has been manipulated to include the purported Duterte quote and has been disowned by the PNA.

The graphic was published on Facebook here on April 6, 2020. 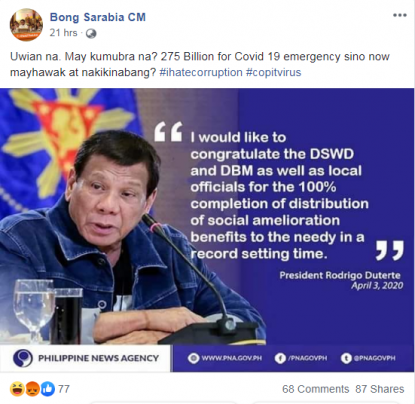 The quote, which is dated April 3, 2020 and attributed to Duterte, reads: “I would like to congratulate the DSWD and DBM as well as local officials for the 100% completion of distribution of social amelioration benefits to the needy in a record setting time.”

DSWD and DBM are acronyms for the Department of Social Welfare and Development and Department of Budget and Management, two government agencies involved in administering the Philippines’ recently-enacted cash assistance program for low income households affected by the COVID-19 emergency.

The PNA took to Facebook on April 6, 2020 to deny publishing the graphic, saying that it was “maliciously culled” from another quote card.

"The Philippine News Agency clarifies that such quote card of President Duterte congratulating the DSWD, DBM, and local officials for the supposed 100 percent completion of the distribution of social amelioration benefits was never published. It was maliciously culled from a quote card posted on its Facebook page on April 4, 2020,” the statement read.

Below is a screenshot of PNA’s statement showing a comparison of the doctored quote card and the original:

The original PNA graphic, which can be viewed here, quotes Duterte saying in a mix of English and Tagalog: “I am calling upon the ROTC, get in touch with DSWD. Those in cities, just give your accreditation, maybe an ID and help (in distribution).”

Below is a screenshot of the original PNA graphic: 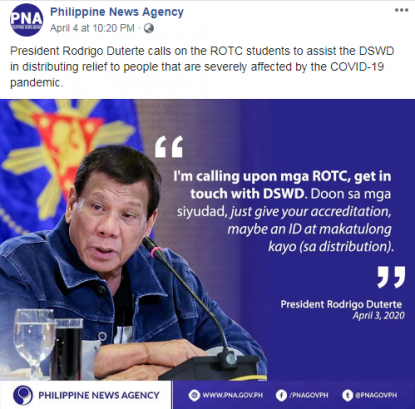 An official government transcript of Duterte’s April 3 speech matched the quote on the original PNA graphic. At no point in his remarks does Duterte say the cash assistance program is complete.