Social media users claim that Fox News star Tucker Carlson’s home was targeted by anti-fascist movement Antifa after The New York Times published his address. This is false; the article had not been published at the time the claims were made, making it impossible for Carlson’s home to have been targeted as a result.

“ANTIFA has shown up threatening his wife & kids,” according to the post, which included a photo from a Google Image search for Murray Carpenter, a freelance journalist who sometimes works for the Times. 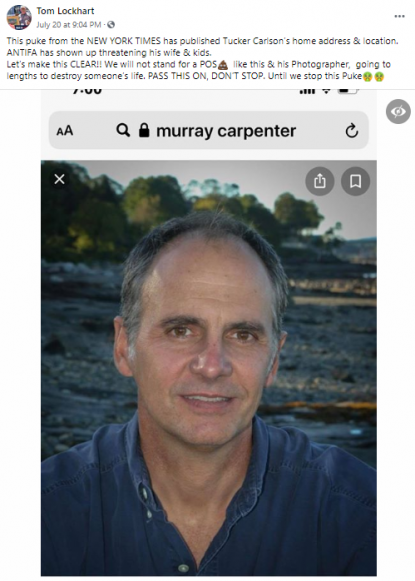 Other social media users shared similar claims, with some even accusing Carpenter of calling for an attack on Carlson after revealing his address. These hoaxes led some people to support the release of Carpenter’s private information in retaliation, a process known as doxxing.

The claims emerged after Tucker Carlson mentioned on July 20, 2020 that The New York Times was working on a story about the home that he lives in with his family.

“Why is The New York Times doing a story on the location of my house? Well you know why, to hurt us,” Carlson said on his show “Tucker Carlson Tonight,” before mentioning Carpenter and the photographer allegedly working on the story by name.

Carlson’s show, which leans pro-Trump, has an average audience of several million viewers every weeknight, and is the most-watched show in the history of cable TV. 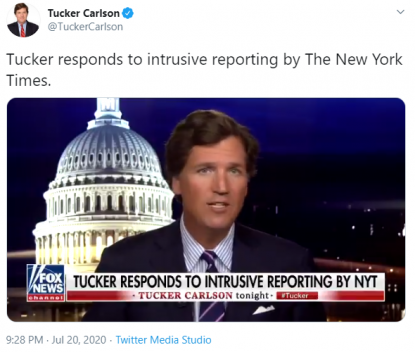 However, the Times’ article has not yet been published.

A search for “Tucker Carlson” on the newspaper’s website on July 22 showed that the most recent article featuring the TV presenter’s name was a July 11 piece about a writer for Carlson’s show who resigned after it was revealed he penned racist, sexist and obscene tweets. 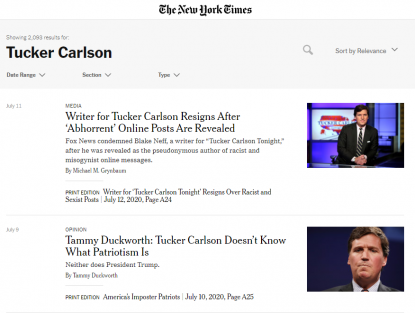 Screenshot of a search result on the New York Times website on July 22, 2020

“While we do not confirm what may or may not publish in future editions, The New York Times does not plan to expose Tucker Carlson's residence, which Carlson was aware of before his broadcast,” the newspaper told AFP in an emailed statement.

.@nytimes does not plan to publish Tucker Carlson's residence, which Carlson was aware of before his broadcast tonight. pic.twitter.com/npg93Cdmbm

Contacted by AFP, Carpenter declined to comment on the situation.

A Fox News spokeswoman told AFP by email that Carlson had taken issue with not being contacted about the story.

“Murray Carpenter has not reached out to Tucker Carlson for his story, nor has the piece been published,” the spokeswoman said.

While Carlson’s home was not targeted as a result of an article by the Times, political activists did gather at his residence two years earlier.

In November 2018, members of the self-proclaimed anti-fascist (Antifa) group Smash Racism DC gathered outside Carlson’s residence in the US capital, yelling that he promotes “hate.” They spray-painted an anarchy symbol on his driveway.

In a statement to the Washington Post, Fox said it had conducted a “comprehensive independent investigation” and had found the claims “false, patently frivolous and utterly devoid of any merit.”