Skip to main content
A health worker administers a dose of the Pfizer-BioNtech COVID-19 vaccine at Clalit Health Services, in a gymnasium in the Israeli city of Petah Tikva, on February 1, 2021. - Israel's nationwide lockdown was extended to contain the coronavirus which has continued to spread rapidly as the country presses ahead with an aggressive vaccination campaign. (Photo by JACK GUEZ / AFP)

A video has been shared in multiple Facebook posts alongside a claim that it shows a person who died “within 15 minutes” of receiving a Covid-19 vaccine. The claim, however, is false: the footage in fact shows a man who collapsed from an unrelated ailment at a vaccination clinic in Israel and was later released home, the administering healthcare organisation told AFP; an Israeli government report on Covid-19 vaccine safety also makes no mention of any vaccine-related deaths.

The video was published on Facebook here on February 4, 2021. 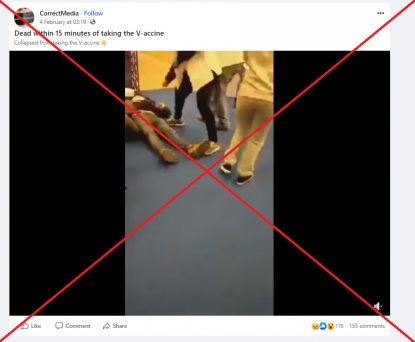 The video was also published alongside similar claims on Facebook here, here and here.

Logos seen in the footage indicate that the incident occured at a vaccination clinic managed by Clalit, a major health services organisation in Israel.

Below is a screenshot comparison of the Hebrew branding seen in the footage (L) and the official Clalit logo (R):

A representative for the organisation confirmed that the footage shows a Clalit clinic and denied that the video shows a man who died after receiving a Covid-19 vaccine.

“This video shows a young man who came to get vaccinated and didn’t feel well. As you can see, he was immediately treated by the medical staff, and was sent to a hospital, and he was checked and was shortly released to his home. It is NOT an allergic reaction to the vaccine,” the representative told AFP via Facebook Messenger.

The Israeli government's Follow-up Committee for the Effectiveness and Safety of the Vaccine for Coronavirus Disease also released a report on vaccine side effects here on March 1, 2021.

The report makes no mention of any vaccine-related deaths. All of the confirmed side effected, the report states, were “minor and passed".

There are also no credible media reports about a young man dying at a Clalit clinic within 15 minutes of receiving a Covid-19 vaccine.

The misleading post circulated as Israel continues to rapidly administer Covid-19 vaccines, with Our World In Data reporting 115.19 vaccination doses per 100 people as of March 31, 2021.