A video of a verbal confrontation between Indian and Chinese soldiers along the India-China border has been shared repeatedly in multiple posts on Facebook and Twitter alongside a claim that the skirmish occurred in May 2020. The claim is false; the video has circulated online on various platforms since at least January 2020. 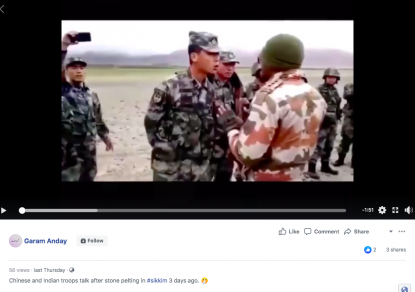 The post’s caption reads: “Chinese and Indian troops talk after stone pelting in #sikkim 3 days ago.”

On May 9, 2020, Indian and Chinese soldiers were involved in a cross-border physical altercation in Sikkim, a state in northeastern India that borders China’s Autonomous Tibet Region, AFP reported.

The Chinese soldier’s remarks translate to English as: “You tell him, I’ll be on duty in his area. Get out, you tell him to get out, otherwise they will bear the consequences. Get out, I don’t like them. If they don’t leave, I’ll call the bombers to let them all die in this place.”

A reverse image search on Yandex with video keyframes extracted using InVID-WeVerify, a digital verification tool, found the same footage was published on YouTube here on January 13, 2020, months before the misleading post’s claim.

The title of the video reads: “Chinese army arguing with Indo Tibetan Border Police (I.T.B.P.) in Border of Arunachal Pradesh.”

The Indo-Tibetan Border Police is an Indian paramilitary unit that guards the India-China border along India’s five border states, including the northeastern state of Arunachal Pradesh.

Below are screenshot comparison of the video in one of the misleading posts (L) and the YouTube video from January 2020 (R): 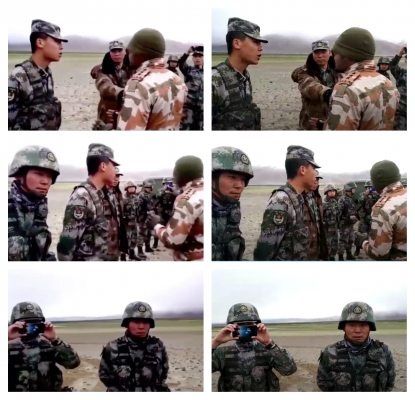 The light camouflage uniform worn by an Indian soldier in the video also bears the acronym “I.T.B.P.” on the shoulder, as seen in the screenshot: 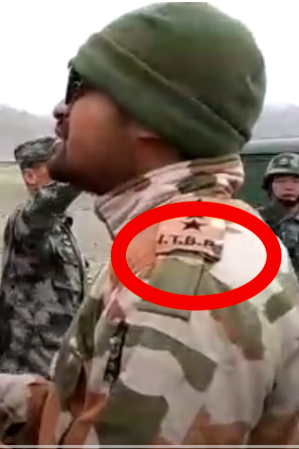 Screenshot of an Indian soldier in the video

The green camouflage uniforms worn by the Chinese soldiers in the video also matches those worn by China’s People’s Liberation Army, as seen in this AFP photo.

Below is a screenshot comparison of the Chinese uniform seen in the misleading post (L) and the uniform worn by a Chinese soldier in the AFP photo (R):

Footage of the altercation was also published in January 2020 on YouTube here and here, and Weibo, a Chinese microblogging website, here and here.

Oriental Daily News, a Hong Kong newspaper, reported on the footage in this Chinese language article on January 18, 2020.

The article's traditional Chinese-language headline translates to English as:  “Video of China-India border standoff circulates online / People's Liberation Army officer roars: Get lost if you are not up for a fight.”

The report states the footage could have been filmed years ago, according to social media users.