Footage of an assault has been shared repeatedly in multiple posts on Facebook and Twitter alongside a claim it shows a Chinese engineer beating a Pakistani driver for falsifying petrol bills in the Pakistani city of Karachi. The claim is false; the video has circulated since at least 2016 in reports about an assault in Malaysia; the men in the footage can be heard speaking Malay and wearing a shirt that bears the logo of a Malaysian electoral campaign.

The 30-second clip shows a man beating another man with a stick, while a third man looks on.

CPEC is an acronym for the China Pakistan Economic Corridor, a major energy and infrastructure investment project between the two countries. 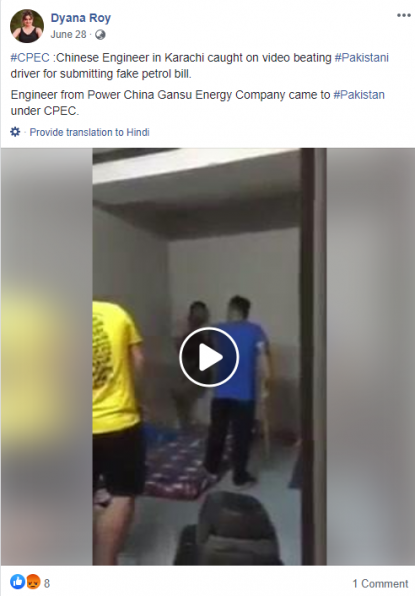 The same footage was published by The Star, a Malaysian newspaper, here on November 29, 2016. The report bears a Kuala Lumpur dateline and is headlined: “Police seek info on violent caning shown in viral video”.

A closer analysis of the video reveals the men are speaking Malay, the official language of Malaysia. One of the men is seen wearing a shirt that features the logo of Global Bersih 5, a campaign for fair elections that was organised in Malaysia in 2016.

The video also circulated in 2016 on Malaysian Facebook pages. The footage was published here in a post that has been viewed 490,000 times and shared 10,000 times.

PDRM is an acronym for the Royal Malaysia Police.

Below is a screenshot comparison of the video in the misleading Facebook post (L) and the 2016 video (R): 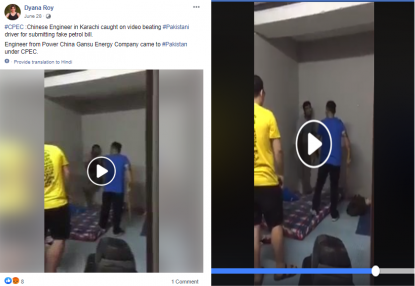